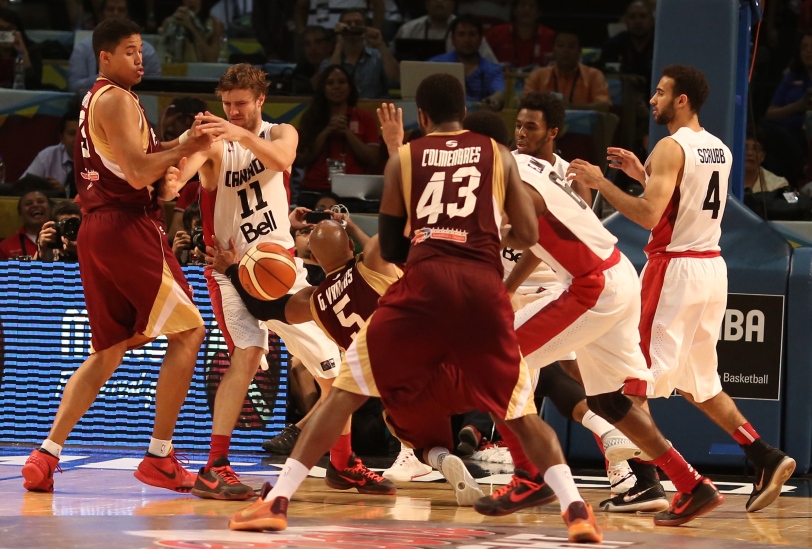 (words and images by Christopher Johnson, all rights reserved)

Venezuelans have been through hell. A nasty dictatorship (worse than Harper). Violent crackdown on protests. Extrajudicial killings. Hardcore poverty and inequality. Venezuelans know all about fighting for their lives, and that means cheating and playing dirty sometimes.

I grew up in the Detroit area, and I’ve played street ball in war zones and the slums of New York, Yugoslavia, China, Thailand and the Philippines. But San Cristobal, Venezuela was the roughest I’ve ever seen. These guys, who knew how to use knives and guns, thought nothing of cheap shots to the head, ribs and groin. They were basically saying to me: “We’re not afraid to bleed for it. Are you?” They basically scared me off the court.

That’s what Venezuela did to beat a young Canadian team laden with ballyhooed NBA millionaires with bright futures. A team of older, unknown guys rattled the young Canadians, disrupting their rhythm and concentration. Led by their vociferous coach Nestor Garcia, they screamed bloody murder at Canada early and took away Canada’s calm and confidence.

They forced 17 turnovers, held Canada to 14 assists, and won most of the dozen loose balls. Canada had to battle just to hold onto the ball. 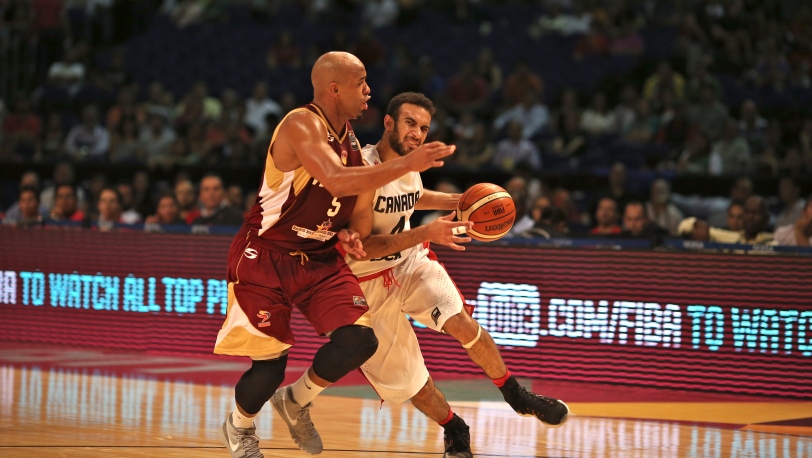 Canadian tennis ace Milos Raonic talks about the importance of being able to win on bad days by “imposing” his game upon the opponent and taking away their time and comfort.

Venezuela, not Canada, imposed their brand upon the game.

They outsmarted Canada too. They took away Andrew Wiggins’ spin move by using FIBA rules to clog the lane with two guys, effectively triple-teaming him, and when he did drive and leap, they tripped or under-cut him.

They overplayed lanes to disrupt the flow of Canada’s passing game, forcing Canada to over-dribble and take bad shots. “They tried to snuff our transition in the backcourt, two or three guys would run at the ball,” said Canada coach Jay Triano. “And we did turn it over like we knew they were going to try to make us do.” 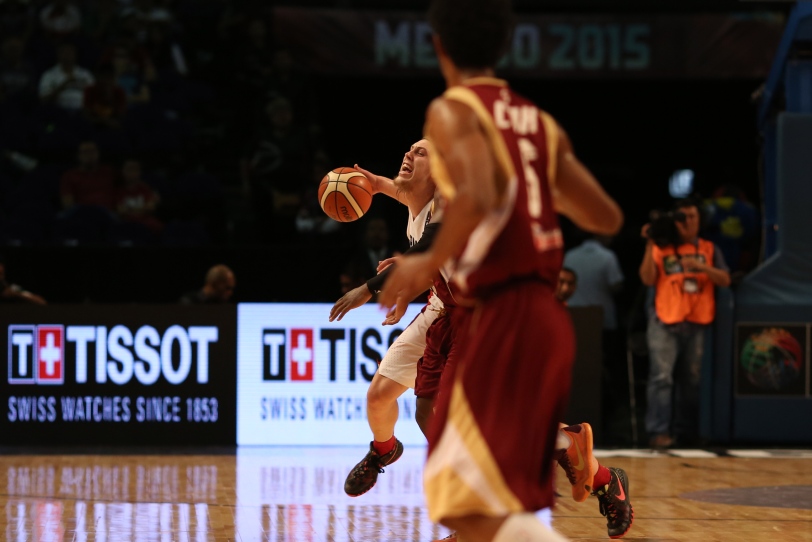 They held Anthony Bennett to zero points. They forced sharpshooters Brady Heslip and NIck Stauskas (suffering from food poisoning) to rush their shots. They lured Kelly Olynyk into dribbling coast-to-coast and then stole the ball from him.

They ran multiple moving screens and rolls until they found a mismatch to exploit. They confused and penetrated Canada’s porous interior defense.

Playing with a horseshoe in the butt, backup point guard Heissler Guillent — and others — hit incredible, off-balance, falling-out-of-bounds shots.

Finally, Jose Vargas hit a free-throw to win the game.

“Venezuela played a good game. We didn’t play the way we are capable of playing for 40 minutes straight and it hurt us,” Olynyk said. “I can’t speak for other guys, we came out a bit flat and Venezuela did a good job and they made shots when it counted.”

The more aggressive, dominant, hungry and fortunate team won. Even without NBA guard Grevis Vasquez, Venezuela was better on the day. They deserve to go to the Rio Olympics. Congratulations to them.

The great IHT soccer writer Rob Hughes wrote about how 1990 World Cup referees in Italy had to interpret between the cultures of England, Argentina and Cameroon — each with different unwritten rules and forms of cheating. At the FIBA Americas last night, the referees could have whistled Venezuela on every play. But they let them play, de facto allowing Venezuela to impose their “rules” and forms of cheating upon a cleaner Team Canada.

Fair enough. They were playing in Mexico City, and Canada was the only non-Latino team, de facto outsiders at this event. (see more here: )

Canada wasn’t an innocent bystander. They put good wood on Venezuela at times. 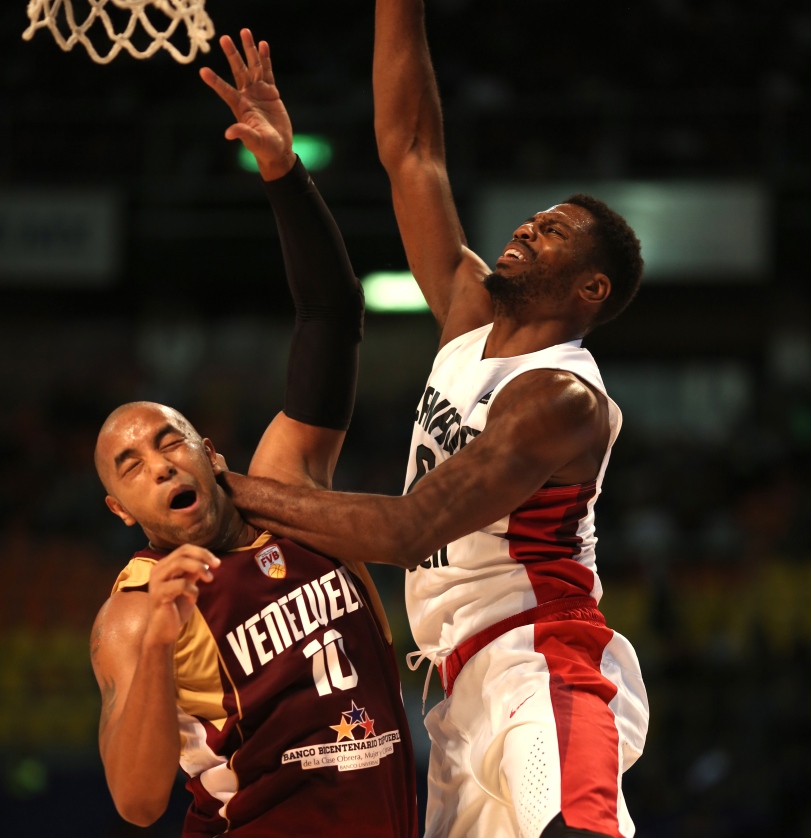 The refs also didn’t call obvious travels on Canada, and at one point, a ref used his hand to shut up Venezuela’s maniacal coach.

But the refs also called ticky-tack fouls on Canada while ignoring muggings all game. In this sequence, Venezuela slapped Cory Joseph in the head, shoved him, and blocked him under the basket. The call? Charging on Canada. 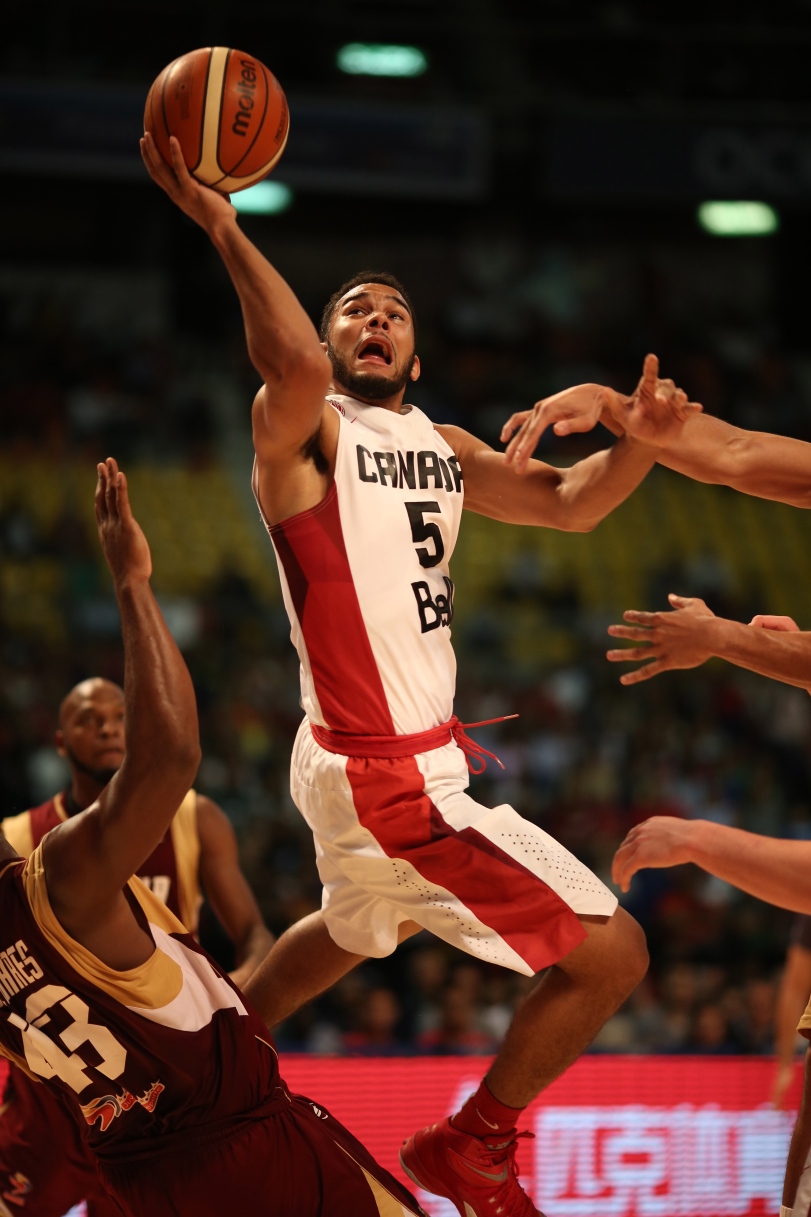 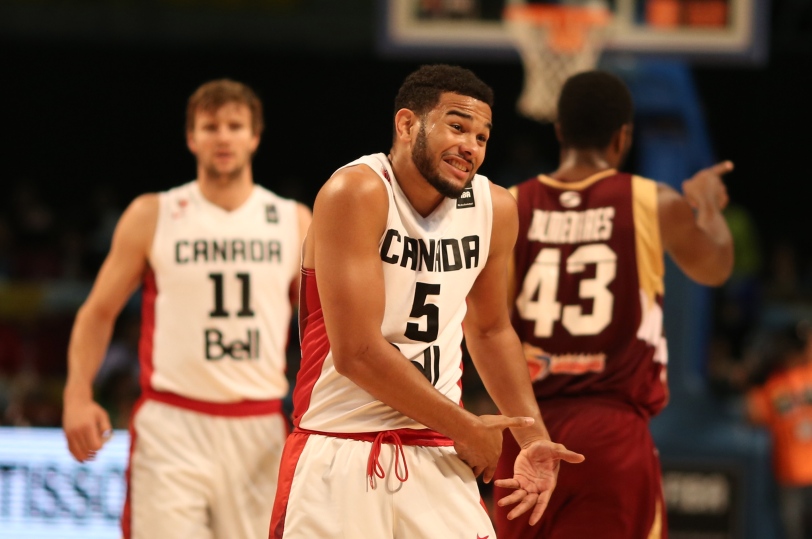 With a minute to go, Kelly Olynyk tripped on a decal, then got tackled and punched by Venezuela. No call.

Finally, in a wild melee for a rebound of a missed shot in the dying moments of the game, the refs called a “phantom foul” on Canada with 0.03 seconds remaining. 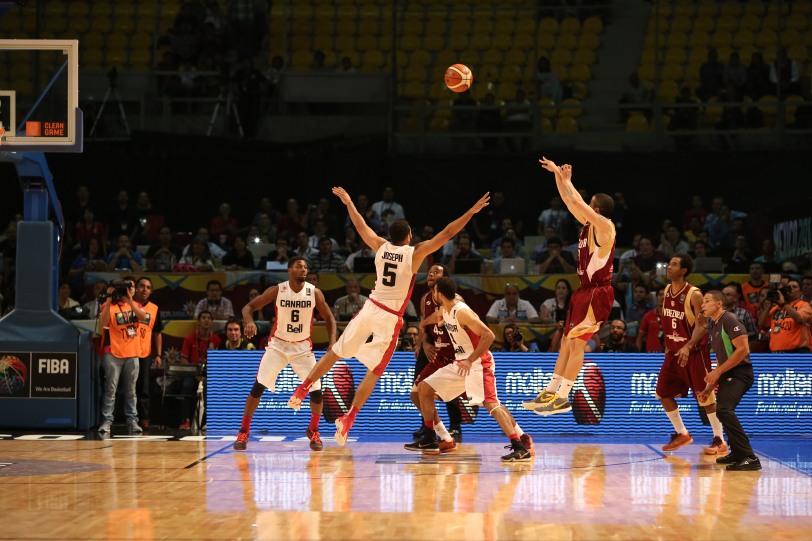 A game-deciding foul at that crucial juncture should be clear and indisputable. Otherwise, don’t call it. Everybody in the basketball world agrees that the players, not refs, should decide the outcome. Let them fight it out in overtime. Everybody — the fans, sponsors, TV rights-holders, FIBA — would gain from 10 more minutes of thrilling basketball.

But the refs, unsure of the call, had a pow-wow. They then reviewed it on the sidelines. They called a foul on Doornekamp.

They put back 0.03 seconds on the clock, which was already prepped for overtime. Venezuela hit a free throw. Game over. Venezuela, not Canada, into the Olympics.

Young guys don’t like being told they’re too young to do something (like winning). They believe they’re invincible, and this swagger helped Canada blow out teams during their 7 wins in a row.

As the Navy Seal saying goes: “When under pressure, you don’t rise to the occasion. You sink to the level of your training.”

This tournament, along with the Pan Am Games, proves that Canadians need better training. Better and more precise entry passes (not telegraphed floaters) to players in the post and on the wings. Better ball security. Better passing out of double and triple teams. Better finishing around the rim. Better shot selection. Better switching and coverage of screens and rolls. Better rebounding. Better coaching. Better execution of whatever game plan coach Jay Triano devised.

Moreover, Canada needs a shot-blocking presence. Tristan Thompson was badly needed in this tournament. Olynyk, Robert Sacre, Andrew Nicholson, Anthony Bennett and others all have to improve on the defensive end. Wiggins, who also guarded a point guard late, made an incredible play, hanging long enough to use both hands to alter a shot, but he was called for a phantom foul. He can’t do everything. 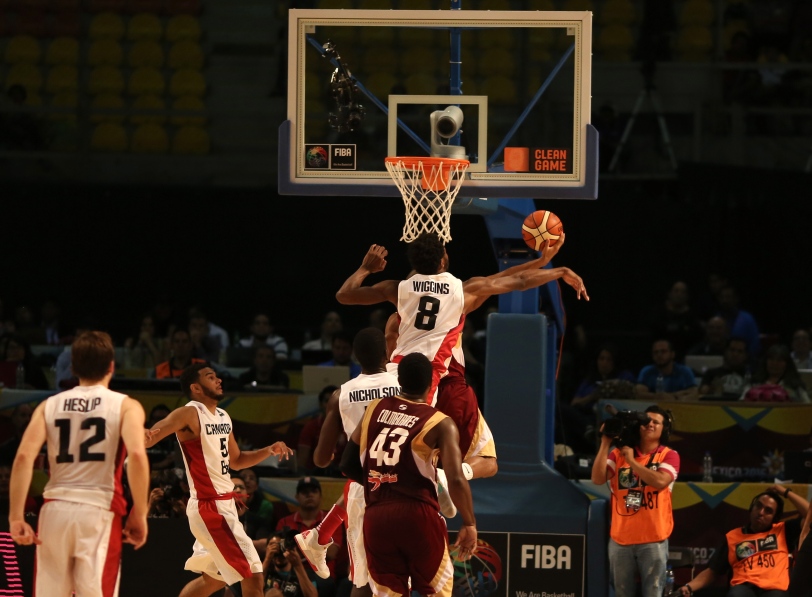 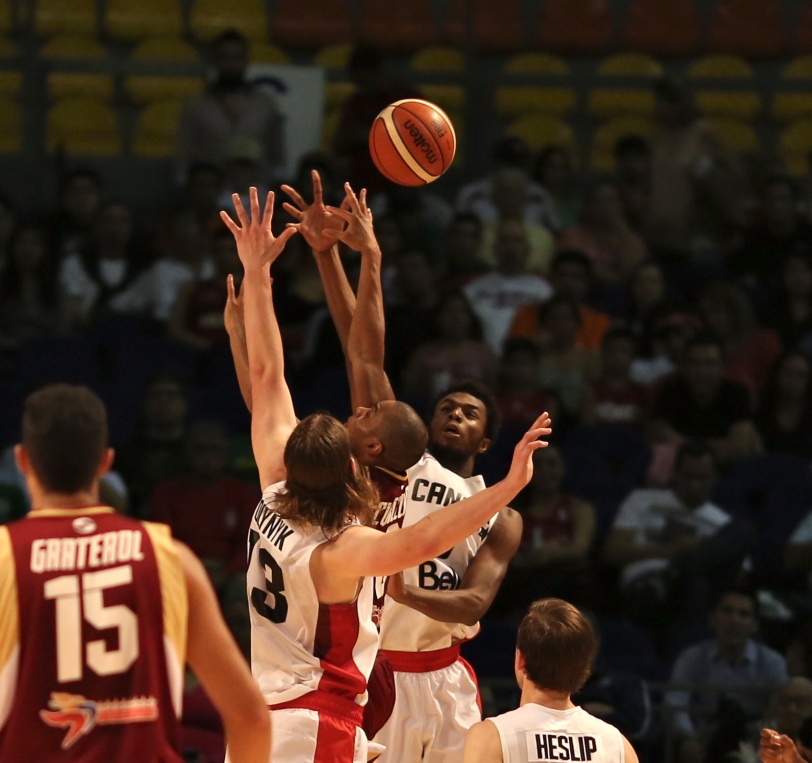 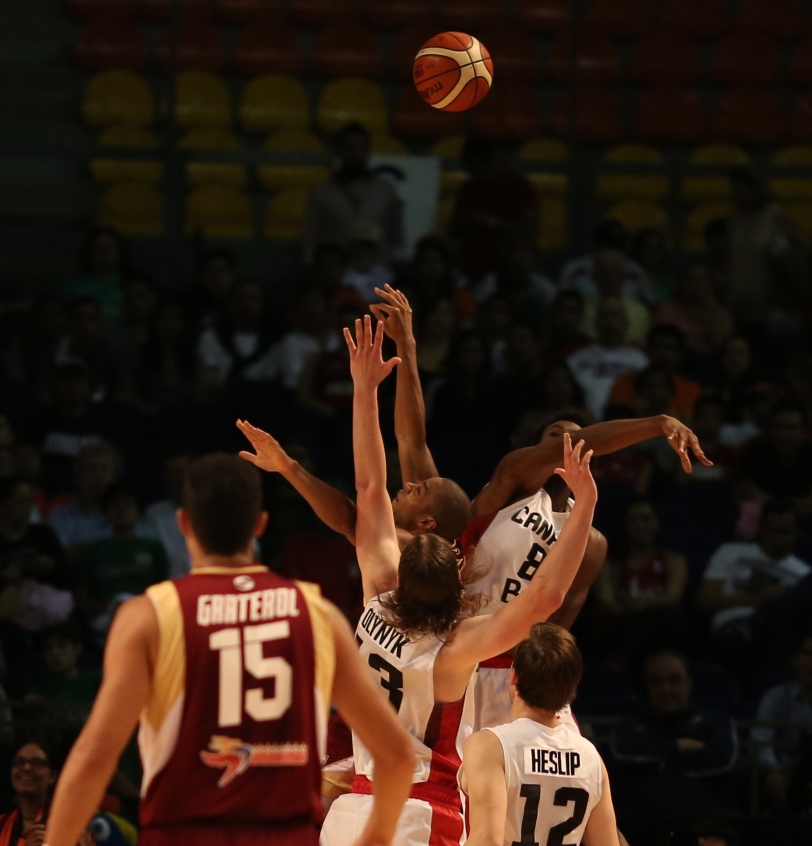 Canada simply needs more experience playing cohesively as a team under adversity and intense pressure. In a way, this loss is a blessing in disguise. Canada will have to train harder and more often next summer in order to win their 6-team group and secure a last-minute Olympic birth.

The potential is there. Thompson, Tyler Ennis, Trey Lyles and Jamaal Murray can fill holes evident at this event. Olynyk, playing the game of his life with 34 points and 13 boards, established himself as a leader and bonafide big stage player at the FIBA level. 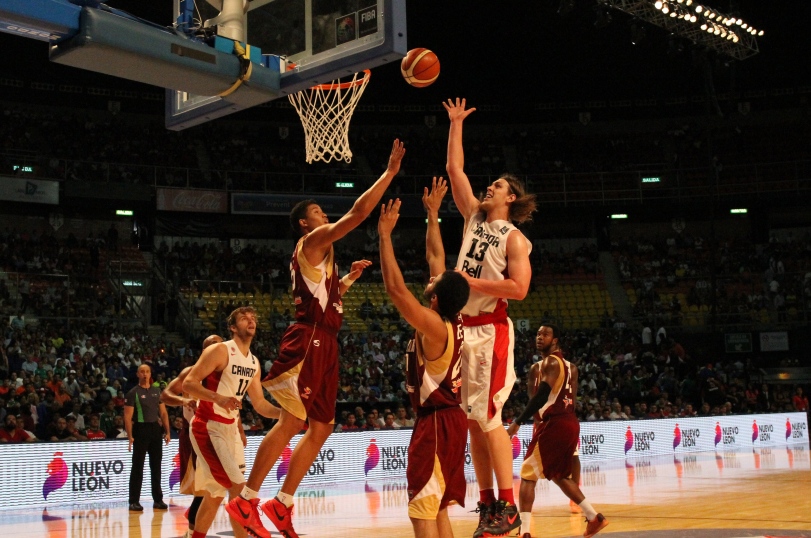 In the second half, Canada found a killer offensive formation, with Wiggins on the wing, Olynyk in the high post and Nicholson down low.

Heslip and Stauskas emerged as Canada’s best shooters since the generation of Triano, Karl Tilleman, Eli Pasquale and Leo Rautins.

Wiggins, who shot the lights out during Canada’s win streak, has many believing he can rise to the level of Lebron, D-Wade, Carmelo and Kobe.

But as Kobe Bryant’s father Joe once told me in Tokyo: “Potential only means that you haven’t done it yet.”

For all the hype about Canada’s resurgence, this team still hasn’t done it yet. It’s only going to get harder if they play bigger, tougher teams such as Lithuania, Serbia, Spain or Turkey in the last-chance qualifier next summer. 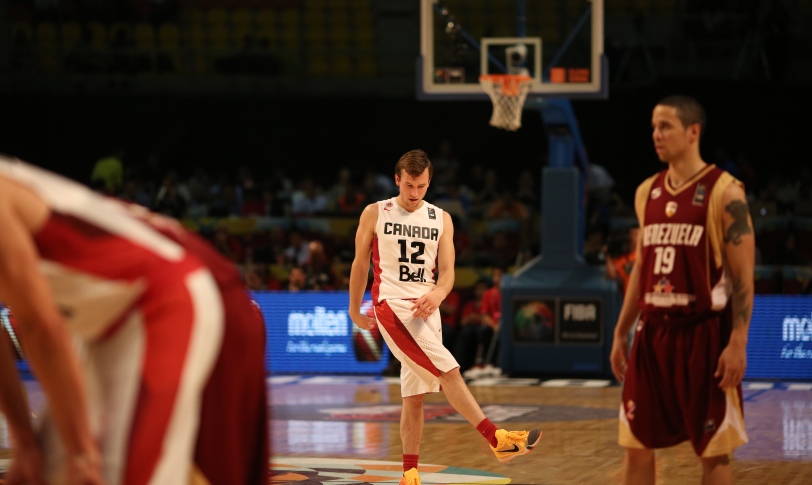