— words and images by Christopher Johnson in Mexico City, all rights reserved —

As a Canadian, watching a game we invented in 1891, I feel like an outsider at the FIBA Americas championship in Mexico City.

We the North (to borrow a Toronto Raptors slogan) are destroying our neighbors to the south. We’ve won seven in a row.

But the Latinos are having the fun, and this event is still very much about them, not us.

The Mexico-Argentina game to end the second round feels like a final, in terms of crowd energy and passion. 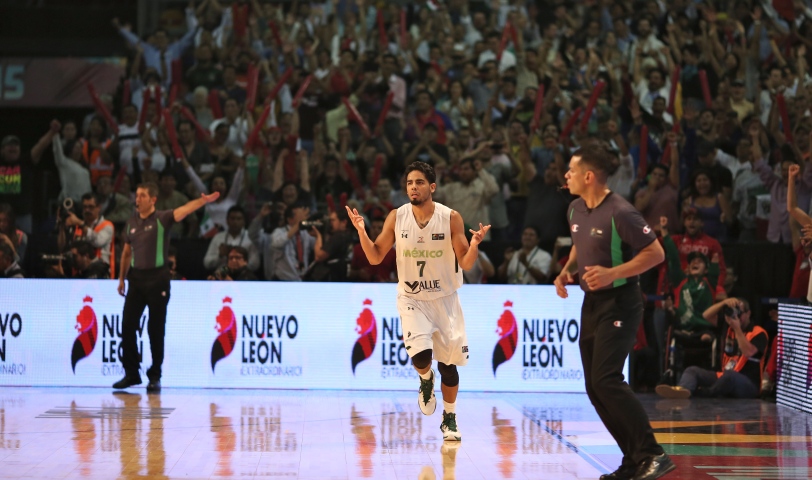 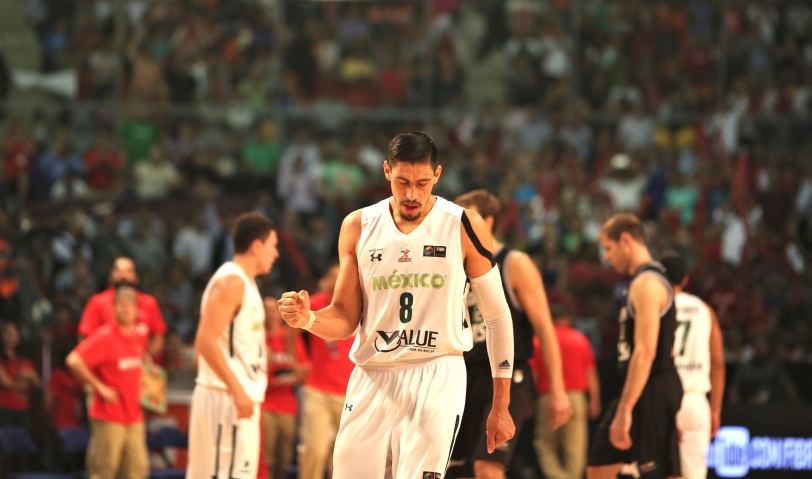 Led by Luis Scola and Andres Nocioni, Argentina beat Canada in the opening game and remains the favorite.

Despite letting Mexico come from behind to beat them, Venezuela qualified for the semis by beating Panama on Wednesday.

Host-nation Mexico has reached the semi-finals, beat Argentina Wednesday, and packed out an arena that looks (in my twisted imagination) like a plate of over-cooked natchos.

Rabid Mexican fans — many behind a class-conscious fence separating lower and upper decks — scream every time Mexico scores, even when trailing Canada by 25 points.

The volunteers and security guards naturally assume everybody speaks Spanish, and entrenched local photographers are surprised when a lone Canadian “gringo” wants a seat on the bench along the baseline.

In the press center outside the arena, it’s a Latin American fiesta. Dozens of Latino journalists carouse in Spanish, smoke cigarettes and get pissed on weekday afternoons on free beer courtesy of Coors Light. Meanwhile, in a sort of non-smoking section, a cabal of about a dozen diligent Toronto-based journalists (some in suits and ties) take over a table and quietly report on Canada’s unprecedented success in this event. They also tweet about a handful of Canadians who brave muggers and kidnappers to cheer on Team Canada.

Being a Canadian here doesn’t carry the cache that Americans get at FIBA events when NBA stars roll into cities such as Sapporo, Istanbul, Prague or London. No matter the language or culture, the Americans seem to take-over any event they attend, and everybody else is awe-struck and playing for second-place.

This Canadian team, on the other hand, is sneaking up on people. Whenever I try out my Spanish on them, the stadium volunteers and taxi drivers seem surprised that Canada has a competitive team — the result of years of underachievement, including a winless Turkey 2010 world championship and no Olympic appearances in a generation.

Even on the court, Canadians have to adapt to the foreign FIBA culture, a different set of rules which favor the Argentinians and Mexicans who play this way all the time. 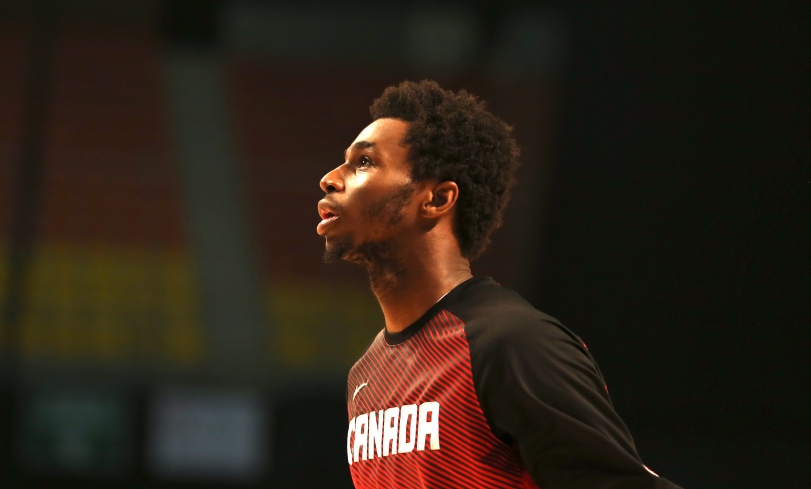 This is how Canada is adapting: shooting the lights out.

We suspected that Nick Stauskas would launch bombs through the dark corners of the Palacio de los Deportes arena. 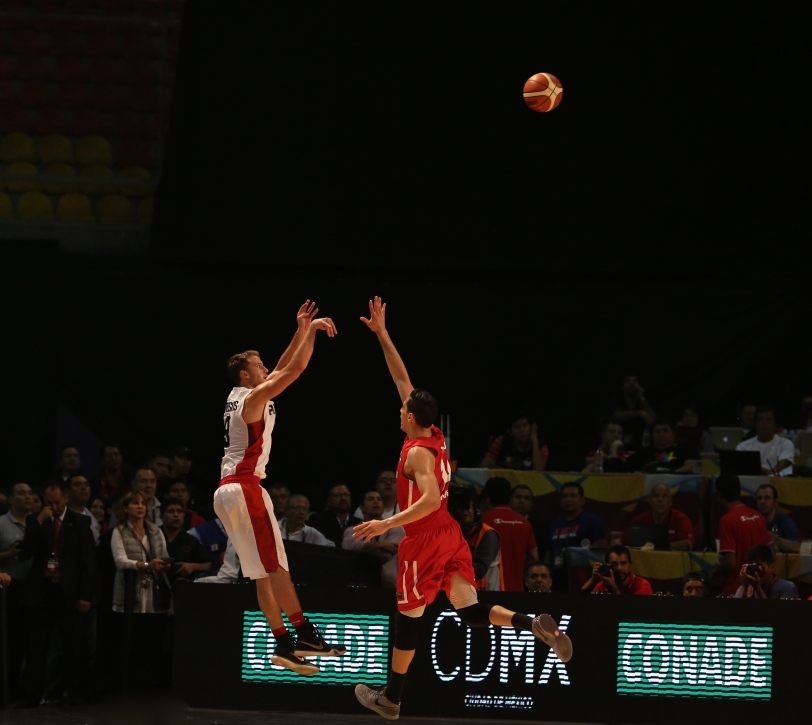 But who knew (many Mexicans didn’t) that Brady Heslip would rain down threes in the Mexican rainy season, and do it with blood in his eyes.

We knew that Andrew Wiggins can elevate like Kobe, LBJ and Melo and create an open look over anybody on the floor.

In a flash, he can turn a routine play — like a spin move — into a highlight reel dunk. He doesn’t just jump. He lifts off, elevates, hangs and glides. 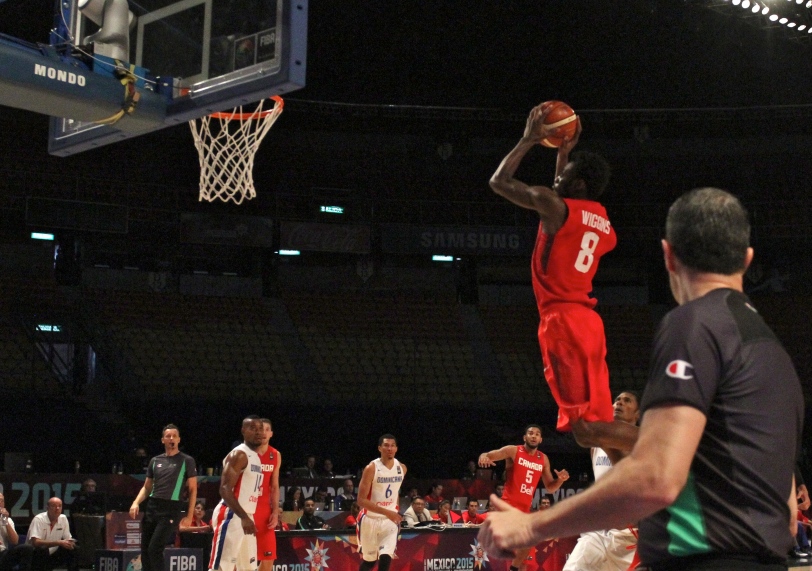 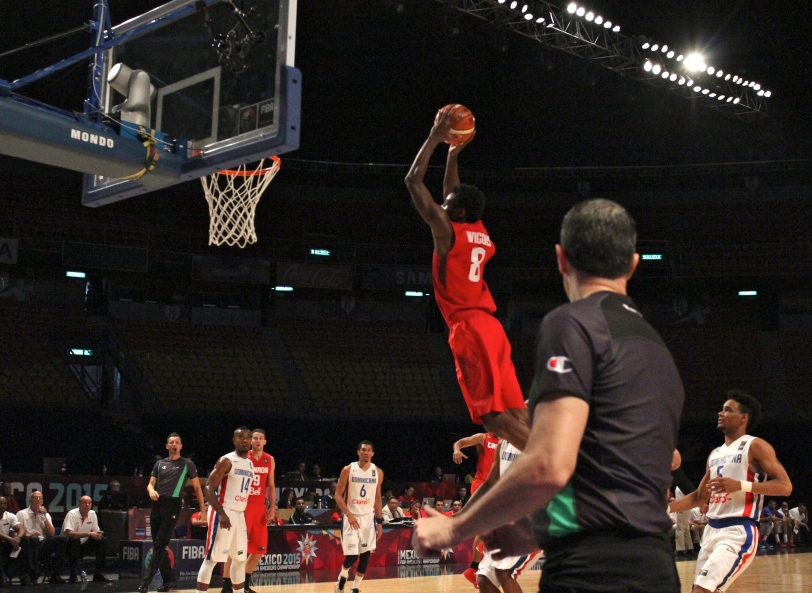 But the knock on him out of high school, and his one-year at Kansas, was that he lacked outside shooting touch. Following up on his NBA Rookie-of-the-Year season, Wiggins is disproving that reputation at this tournament. He’s burying teams early with outside swishes and opening up lanes for Stauskas, Cory Joseph, and Phil Scrubbs to drive and dish. 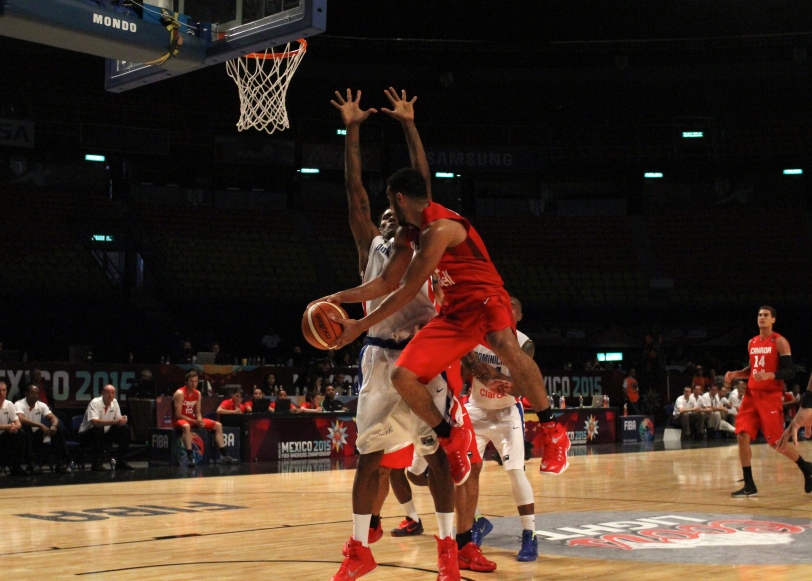 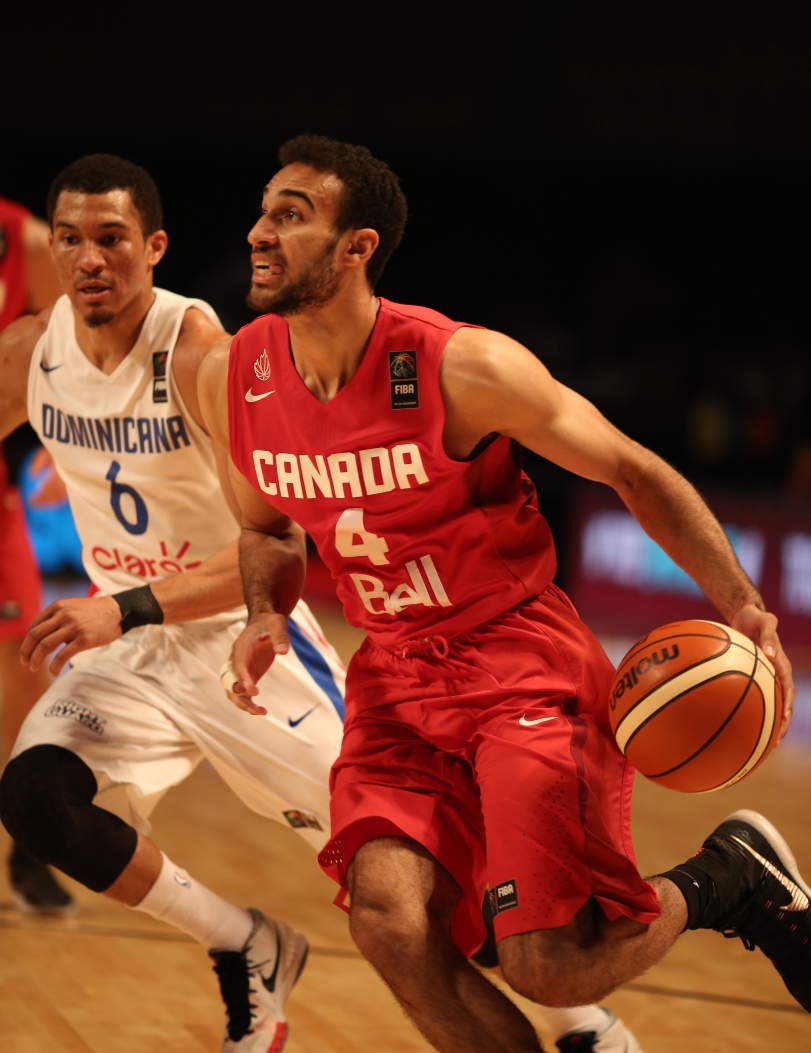 One player like Wiggins can turn a team from a loser into a winner by raising the level — and aspirations — of his teammates. Canada head coach Jay Triano has praised Wiggins for his leadership and giving up minutes to other players.

Coming out focussed and intense, Wiggins has set the tone for a team that has got into the habit of making shots early.

Anthony Bennett has compared the team to a family of guys learning to enjoy playing with each other at the international stage.

Kelly Olynyk, though torched by FIBA stalwart Luis Scola in Canada’s opening game loss to Argentina, has been playing like a guard, dribbling end to end and hitting outside shots. Aaron Doornekamp has been hustling and doing dirty work down low. 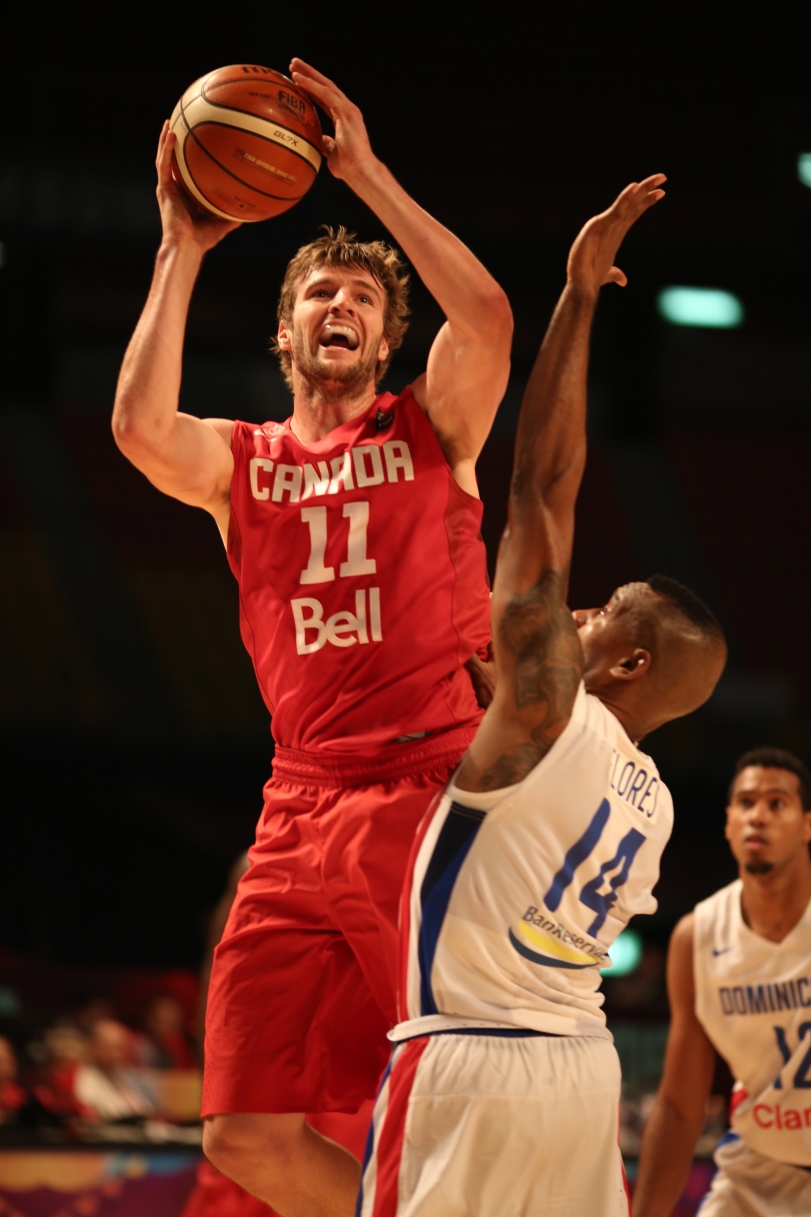 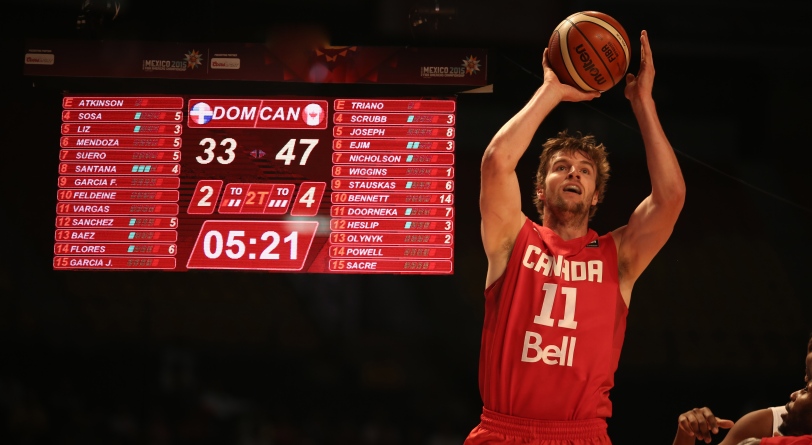 Olynyk and Doornekamp, along with Robert Sacre, never tasted victory during Canada’s 0-5 campaign at the FIBA world championships in Izmir, Turkey. That hard-luck team of scrappers simply couldn’t make shots. But five years later, life is good for Canada basketball.

It’s fitting that Sacre then is the one throwing a towel to the handful of Canadian fans in the Mexico City crowd.

If Canada can win their semi-final and qualify for the Olympics, they might find themselves less of an outsider next year in Rio de Janeiro.