JAPAN: The home where the tsunami stopped

The home in Japan where the tsunami finally stopped

Naoki Suzuki, a truck driver, stands near the site of his home in downtown Rikuzen-Takata where his wife, Kazue, tried to ride out the tsunami as it rose above a nearby three-story apartment complex and post office. (Christopher Johnson/Special to The Washington Times)

RIKUZEN-TAKATA, Japan | Dust swirls across the wasteland where Naoki Suzuki goes every day to gaze at the empty space of his home, where his wife tried to ride out last month’s tsunami.

A burly truck driver, Mr. Suzuki can’t stop crying as he stands in the middle of a city where all but 20 buildings were pulverized and scattered amid a setting framed by hills of bamboo, pine and cedar.

As Tokyo and other parts of Japan try to resume normal work schedules, many in the northeast only now are beginning to grasp the full scale of the disaster. Rikuzen-Takata, which Prime Minister Naoto Kan visited over the weekend, still looks like Hiroshima after the atomic bombing in 1945.

In terms of force and height, the March 11 tsunami was perhaps the greatest in Japanese history: Researchers from the University of Tokyo on Sunday said they found lumber from a port discarded on a hillside about 120 feet above sea level in Miyako, in the Iwate province. Along a coastal highway in Iwate, the tsunami collapsed concrete seawalls and tossed seaside homes deep into hillside ravines.

Unlike other disaster areas where untouched high ground has become hubs for local aid efforts, the devastation of Rikuzen-Takata spreads far beyond the city of 25,000 and into the river valley — even to the old farmhouse of Mr. Suzuki’s parents in the town of Yahagi.

For centuries, the Suzukis and other farmers of Yahagi thought they were safe from the sea, more than five miles away beyond mountains that shielded their crops from sea salt, wind storms and tsunamis that battered the coast.

In a span of about six minutes, a deluge uprooted seaside red pines and carried them over four-story shopping centers and apartment complexes. Spilling into the Kesen River, the tsunami knocked over bridges and railways, then snaked around the mountains into the rice paddies in Yahagi, where it dropped the pines beside poems carved in ancient stones. Surging uphill, the tsunami rushed all the way up to the Suzukis’ garden, drowning winter crops of cabbages and broccoli, ripping apart greenhouses, and soiling the inside of their traditional farmhouse. “We never thought we were living near the sea,” said Mr. Suzuki’s mother, Etsuko. “This was unimaginable.”

Like a mad serpent, it thrashed against a wall of concrete blocks. But there, at the Suzukis’ house, it turned around. Astonished, Etsuko Suzuki watched it retreat down the valley, around the mountains and eventually into the ocean, depositing vehicles and homes along the way — taking thousands of people with it.

Mr. Suzuki hurried back to Rikuzen-Takata from Morioka to search for his wife, Kazue, a gas station attendant. Since the magnitude 9.0 earthquake didn’t damage their house, she thought she could ride out the tsunami on the second floor of their home. “The earthquake knocked out mobile phone coverage, but she could still send me emails,” he said. “Nobody expected the wall of water would rise [30 feet] over their heads.”

For the first week, Mr. Suzuki couldn’t even reach his home until soldiers, using GPS coordinates and educated guesses, pushed aside debris just enough to clear a few streets for emergency vehicles.

For two weeks, he searched the entire tsunami zone from the sea to the river valley looking for any sign of his wife or their white Honda. “I wanted to find anything, just one thing to remind me of our previous life. The tsunami took away everything. I only wanted one thing,” he said.

On April 2, the day of the prime minister’s quick visit to the disaster zone, Mr. Suzuki found the family car in the debris across the street from an obliterated bank, where police stood around a safe of cash. The car was full of sand, water and broken glass. Kazue’s mobile phone was gone. But he did find her little blue Disney mascot, still hanging from the dashboard. He wrung it out and put it on the passenger seat of his Jeep, where Kazue would normally sit, and took it to his mother’s house in Yahagi to dry it.

Remembering something, he went back to see the car one last time and unscrewed the license plate as a keepsake.

“I’m lucky to be in the trucking business,” he said, his eyes puffy red. “It’s easier for me to move. I’m used to living on the road anyways, and that’s where I’m going to be for a long time to come.” 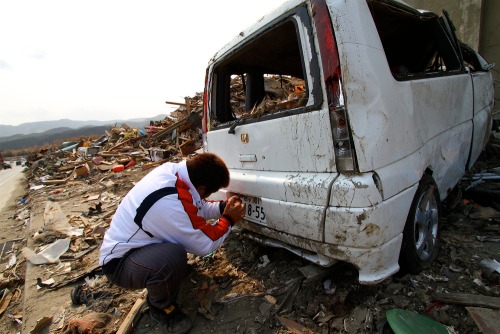