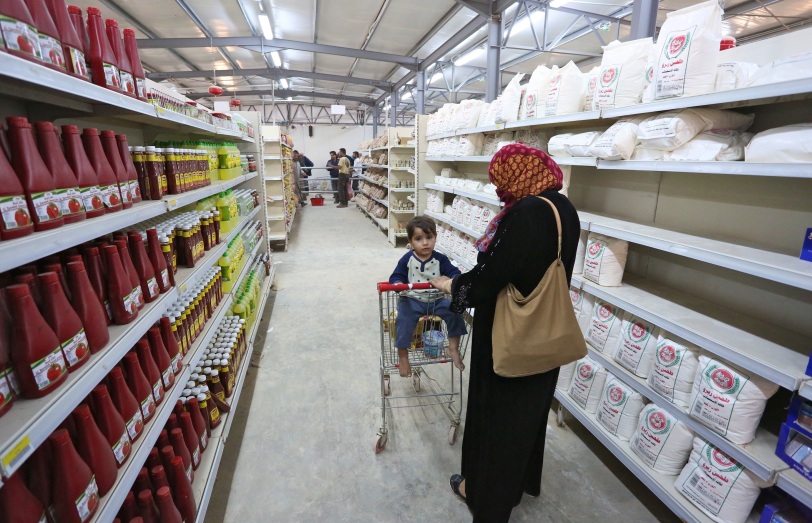 — by Christopher Johnson and Urban Hamid at Zaatari refugee camp near Daraa, Syria —

On the inside, the Tawzeed and “Safeway” supermarkets look like other grocery stores in Jordan, with the same items and prices.

But these supermarkets are staving off starvation for about 80,000 hungry Syrians in the world’s largest refugee camp, Zaatari, a few kilometers from Syria’s civil war.

Using supermarkets is a revolutionary idea for relief agencies feeding an estimated 50 million refugees worldwide, including an estimated six million displaced inside Syria and four million Syrians in Jordan, Lebanon and Turkey.

Instead of handing out sacks of mass produced flour or rice, the World Food Programme gives refugees “credit cards” and wires about 24 Jordanian dinars (about 40 dollars) every month into their accounts. Refugees fill shopping carts with items of their choice — such as chicken and chili peppers — and use these “credit cards” at a check-out cashier.

“They can now shop in a more dignified manner,” says WFP communications officer Joelle Eid during a visit to the camp. “Syrians pride themselves on the variety of their cuisine. It’s very important for them to choose what they eat. They have a wide variety of food options here. They can shop throughout the month, whereas when they got vouchers they had to shop all at once.“

Gavin White, a UNHCR officer at Zaatari, says the cash card and supermarket idea, initiated at Zaatari, has now spread to Lebanon, and will be tried at other camps worldwide. “Zaatari is the first case of a supermarket in a camp,” says White. “It’s because the Jordanian authorities were flexible enough to allow it. Other countries want camps to close and people to go back. Jordanians are more pragmatic because they have a history of accepting Iraqis and Palestinians. They saw the business logic of having a supermarket. It’s just opening another branch in the country that just happens to be a refugee camp. They have a huge customer base wanting to buy things.” 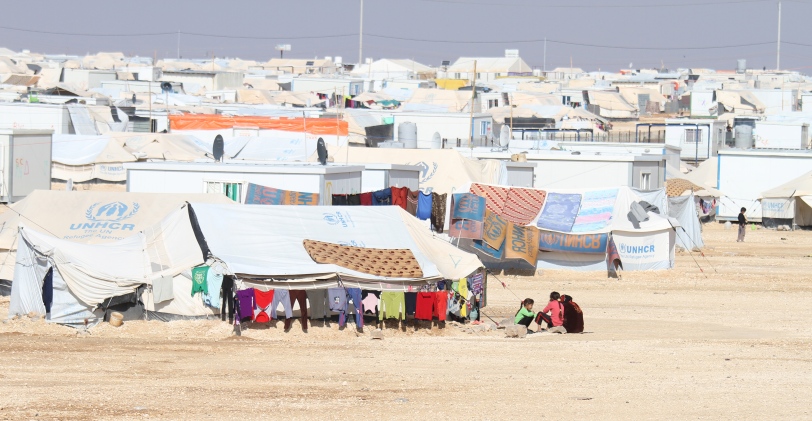 Many refugees welcome the idea, but complain that 24 JD per person per month isn’t enough.

“Of course we are very grateful to the Jordanian government, the King and the people, but 120 JD a month is not enough for six people,” says a father of four, withholding his name to protect relatives in his native Daraa province of Syria. “We spend 60 JD per month just for basic stuff like rice, sugar, and oil. This means that every month we are without certain food items. We only eat meat once per month.”

He lists off prices — 2.5 JD for yoghurt, 0.45 JD for garlic — and calculates how to survive until the end of the month. “Only today I spent 10 JD just for lunch. Then you have to spend the same amount for breakfast and dinner. So basically, each month the first 10 days we live off the card, the rest will be bulgur (a local staple) unless we can get money somehow.”

He says he also needs to buy sandals, underwear, shirts and soap for his kids. “At the beginning of every month, my wife comes with a pen and writes a list of all the things we have to buy: 10 kilograms of sugar, three cans of oil, one bag of flour, dried milk, a bag of salt, a bag of rice, some spaghetti — all this costs between 60 and 70 JD per month. The rest is going to provide lunch and dinner. It is not enough.”

Eid of WFP says the amounts are calculated to provide basics. “Many refugees have other sources of income either from the market or savings that they can use. The money they get in the cash card is calculated to provide them what they need in terms of basic food supplies. You have to be careful how you use the card,” she says. “We conducted an assessment in Jordan in the beginning of last year and discovered that 85 % of the refugees are dependent on assistance from the WFP. Without this assistance they would be ultimately at risk.”

Eid says the cards also help the UN prevent fraud and monitor how money is spent. “They have to show proper identification to get the card,” she says. “If you sell this card once you will never get it back.”

White of UNHCR says the program is a good example of how the private sector can help refugees, and it’s allowing the UN to phase out bread distribution. “For us, you cut out a lot of administration and overhead costs. You aren’t distributing bags of flour out. You provide dignity to people. Imagine if you’ve lost your home and source of livelihood. You’re stuck in a camp. At least you can choose what you want to cook for dinner. That’s hugely valuable.”

White says Syrian refugees in Lebanon, which doesn’t have massive organized camps like Zaatari, are also using WFP debit cards at stores throughout the country. “It’s a practice that will become institutionalized within other refugee camps,” says White. “Syrians understand what a debit card is. In Sudan or other places, if you established a supermarket and gave them credit cards, they might not understand how to use it.”

White says the idea evolved after a large number of stone-throwing protests that left one police officer dead in late 2012 and forced several aid workers to flee Zaatari. “People were demanding services they didn’t have at that point,” says White. “Usually, the expectations of refugees are limited to food, water and shelter, which are not always guaranteed in their home villages. But in the Syrian context, a big demographic is middle class families. They have different expectations.”

White says protests have ebbed over time, as refugees realize they’re probably stuck in Zaatari longterm, unable to return to Syria amid raging battles. “(US Secretary of State) John Kerry came to the camp. He met with the camp manager, met with refugees. He was quite taken aback by the dialogue. They said to him quite clearly: ‘Are you going to give us weapons? If you’re not going to give us weapons, or bomb Assad out of power, you need to give us everything we need here. A fraction of the money needed to oust Assad would meet our needs here’.”

At the supermarket, the Syrian father from Daraa says he doesn’t blame Jordan for his problems. “I blame the rest of the world for not doing enough to help. The other Arab countries and the UN are not doing enough to help Jordan, Lebanon and Turkey. If you go to a mall, you see people who shop without hesitating at the same time that there are people who have nothing. I swear by God that if you walk anywhere here in the camp, you are going to see people who suffer to the extent that your eyes are going to be filled with tears.” 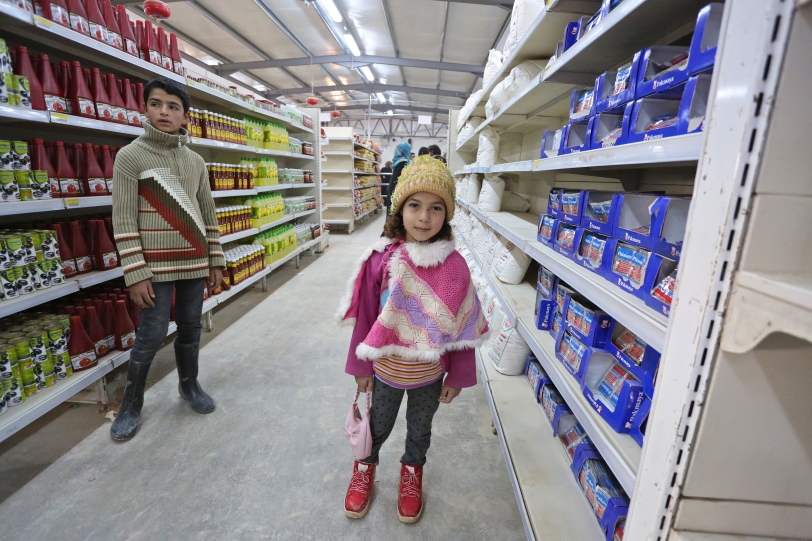 One thought on “A new way to feed Syrian war refugees: supermarkets and cash cards”