Touring northern Thailand, Prime Minister Yingluck Shinawatra faces a rebellion from upcountry business leaders and farmers, and a potential decline in exports as the Europe Union suspends talks over trade and tariffs

—-by Christopher Johnson in Nakhon Ratchasima —

Unable to work at Bangkok offices blockaded by protesters, Thai Prime Minister Yingluck Shinawatra has spent the past few weeks among her supporters in north and northeastern Thailand.

But she now faces a rebellion from an emerging group of former supporters — northeastern business leaders who feel betrayed by rampant corruption and her failed rice price scheme which has left millions of farmers demanding overdue payments.

Thai exports could also decline due to the European Union’s decision to suspend trade talks over how to replace an expiring regime of special tariffs for Thai products, Yingluck wrote on her Facebook page Wednesday.

Previously, the EU’s generalized system of preferences helped Thai products — such as canned pineapples, processed shrimp, and pet food — to command the largest market share in Europe. Thai exports to Europe, worth about $9 billion per year, also included air-conditioners, lenses, motorcycles, and rubber gloves and auto-parts, Yingluck said. But the European Union will next year scrap trade privileges to countries, such as Thailand, deemed as “upper middle income” nations, Yingluck said, according to the Bangkok Post.

In Nakhon Ratchasima, Isaan’s largest city, many people say they have turned against the governing party after years of electing them to power. Even impoverished construction workers and tuk-tuk drivers — who benefited from minimum wage raises and cheaper health care — say they are angry at the government they’ve elected in each ballot since 2001.

“Oot”, a construction worker, says he moonlights as a tuk-tuk driver to send his rural father 3000 baht a month to survive. “He has no money because the government hasn’t paid for his rice. How can he live? How can we like the government now?”

Nevertheless, millions of rural people still do like Yingluck and her exiled billionaire brother, former prime minister Thaksin Shinawatra. Hundreds of Red Shirts staged a boisterous rally in Nakhon Ratchisama two weeks ago. Some leaders even vowed to take up arms against any military or judicial attempt to overthrow the elected government.

But a three-day visit to this city finds no overt signs of any Red Shirt presence here. Instead, the city center features an anti-government protest stage and shops selling the paraphernalia and flags of Bangkok-based protest leader Suthep Thaugsuban. 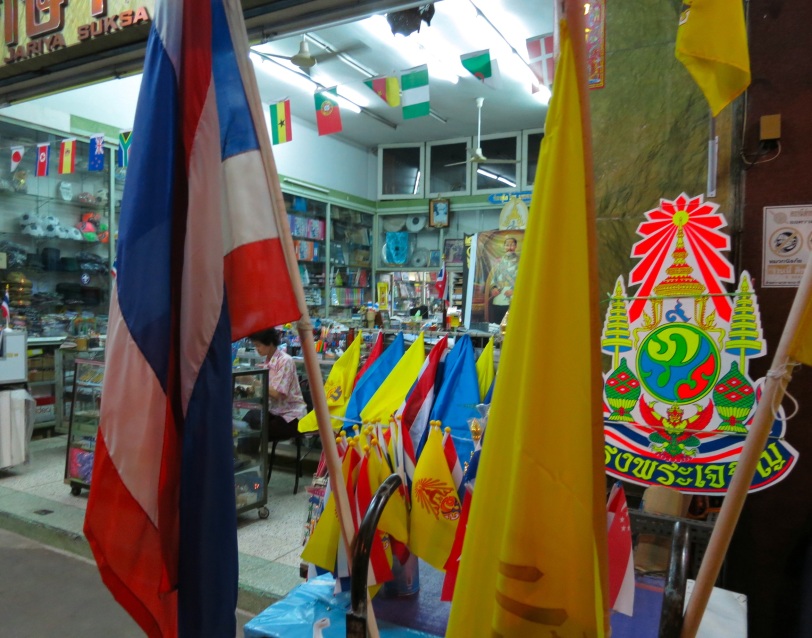 Even police officers say the Red Shirts are afraid to occupy streets in this city, about 300 kilometers northeast of Bangkok.

“Most people in this city, maybe 80 or 90 percent, don’t want the Red Shirts to come here,” says Thavison Lownanuruck, former president of the city’s Chamber of Commerce. “They are still popular in the rural areas but not so much anymore in northeastern cities. This is a big change, and a big problem for Yingluck.”

On Tuesday, Thavison and about 100 local business owners and executives met on the 8th floor of the Sri Pattana Hotel.

“No!” shouted the crowd, blowing whistles.

“This is very unusual,” Lownanuruck said in an interview. “Normally we don’t want to take sides in politics, because it might hurt business. But now we feel we have no choice. We can’t take the corruption anymore.”

He says the emergence of this group in Isaan could re-energize a nationwide protest movement that began in November after the government tried to pass a controversial amnesty bill for hundreds of convicted criminals, including Thaksin.

Thavison says they plan to send about 1000 people on buses to bolster the protest movement in Bangkok, which has been consolidated at Lumpini Park after Suthep agreed last weekend to dismantle stages at key Bangkok intersections.

Thavison’s group also plans to ask the Second Army, which oversees Isaan, to deter Red Shirts from using violence against them. He claims the Red Shirts are trying to recruit “fighters” here. “The police are loyal to Thaksin, so we must ask the army for protection against any Red Shirt violence.”

He says some Red Shirts are his “friends” also, and they often exchange ideas. “If they want to rally here to complain about the other side, OK, no problem. But don’t use violence. Obey the law.”

Adisorn Naowanondha, dean of the graduate school at the city’s Rajabhat University, says many lecturers are asking students to go home to their rural areas and tell their parents about the government and corruption. “But some of the lecturers are Red Shirts also. Some agree with us, others don’t. We have to do a better job of telling them the real situation, by using radio, meetings and lectures.”