Journey through the mass graves of Tacloban, Palo, Tanauan and Tolosa

— by Christopher Johnson in Tacloban, Philippines —

Nobody wants to end up in a mass grave. Most people don’t even think about how they will die.

Nothing can be worse than to live a wonderful life and then end up in a body bag at the side of the road, or in a ditch, or in the yard of a church or school, or buried and rotting for weeks under fetid debris.

That’s where thousands lie in the Tacloban area of Leyte province in the Philippines: hundreds of bodies in a ditch in Basper; hundreds more on the grass in Santo Nino; scores more in the yard of Palo Cathedral; dozens more in front of San Joaquin church in Palo; and dozens more by the highway sign welcoming visitors to Tanawan. Hundreds of people remain missing, and the seaside areas of Palo, Tanawan and Tolosa continue to reek of undiscovered corpses weeks after the Nov. 8 storm.

A death toll can be an abstraction. An official count of roughly 6000 dead, 2000 missing doesn’t sound as bad compared with earlier estimates of 10,000 dead. But when you go around the Tacloban area, seeing mass graves and body bags at multiple sites, the totality of typhoon Haiyan’s destruction begins to sink in. The numbers, like the bodies, pile up. It becomes personal. Every one of these people — 6000 of them or more — had names, histories, friends and family. Each one was special. Each one is a hole in someone’s heart.

Rowy Chuka, a welder from Palo outside Tacloban, is a sole survivor. He ran out of his house, got swept off a bridge, but managed to swim and hold onto a tree during a 4-meter high storm surge on the morning of Nov. 8. He lost his wife, mother, father, and several siblings, cousins, nephews and nieces on Nov. 8. Most of them remain missing. Three weeks after the storm, someone found his 6-year old nephew Robert Chuka atop a coconut tree. With a storm approaching and bells ringing, Chuka buried the boy in front of San Joaquin church. The boy’s twin brother remains missing. 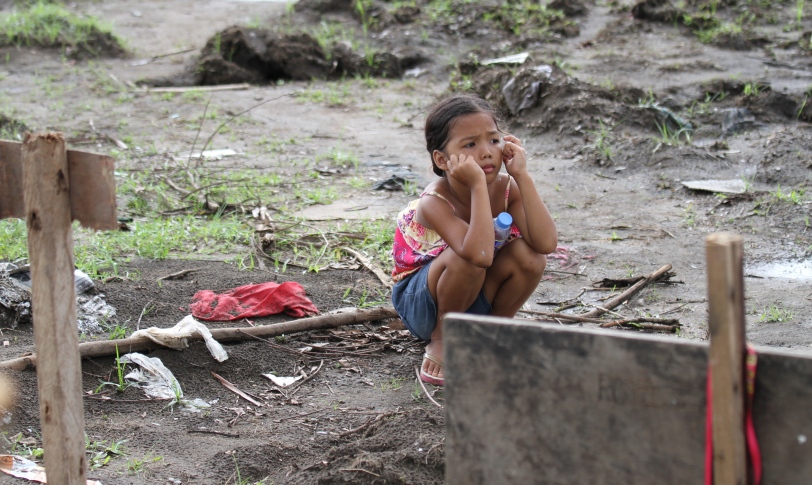 “I’m having a hard time accepting the reality,” Chuka says, with a stoic face shedding no tears. “I have to move on with my life somehow, but I don’t know how.” 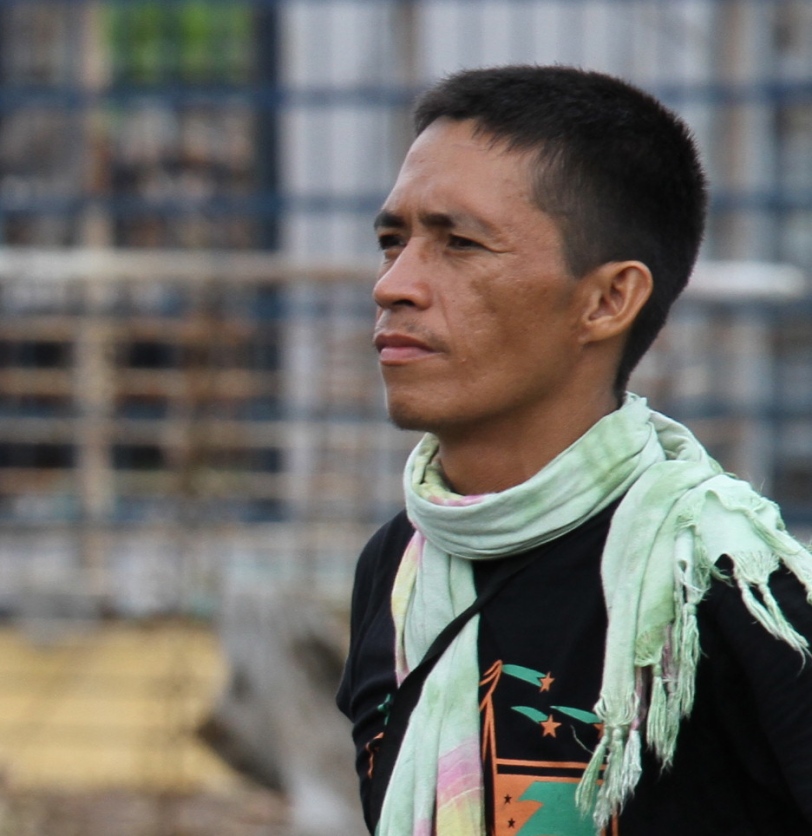 Journalists often have to speak with bereaved survivors of disasters. It’s never easy, but it’s inspiring to spend time with resilient people such as Rowy Chuka, who endured one of the worst storms of all-time.

Mass graves are another thing. Nothing in life could prepare me for the mass grave in Basper a few kilometers outside of Tacloban city.

The stench of hundreds of rotting corpses, barely noticeable at first, sneaks up on me, through my Japanese face mask. Then it pours into my soul, filling me with repulsion. We are supposedly God’s favorite creatures, but we smell even worse than rotting garbage or spoiled meat. I can barely stand up, and I have to fight hard not to vomit. Standing on a mound, trying to stay steady enough to take photographs of the pit before me, I remind myself to fall backward, not forward.

The motorized tricycle driver, an elderly man whose relatives remain missing, stays by the road, afraid of getting close. I move to the other end of the mass grave for a different angle. A group of locals appear. A man stands over the grave, without a mask, and then recoils in horror, spitting out the taste from his mouth. 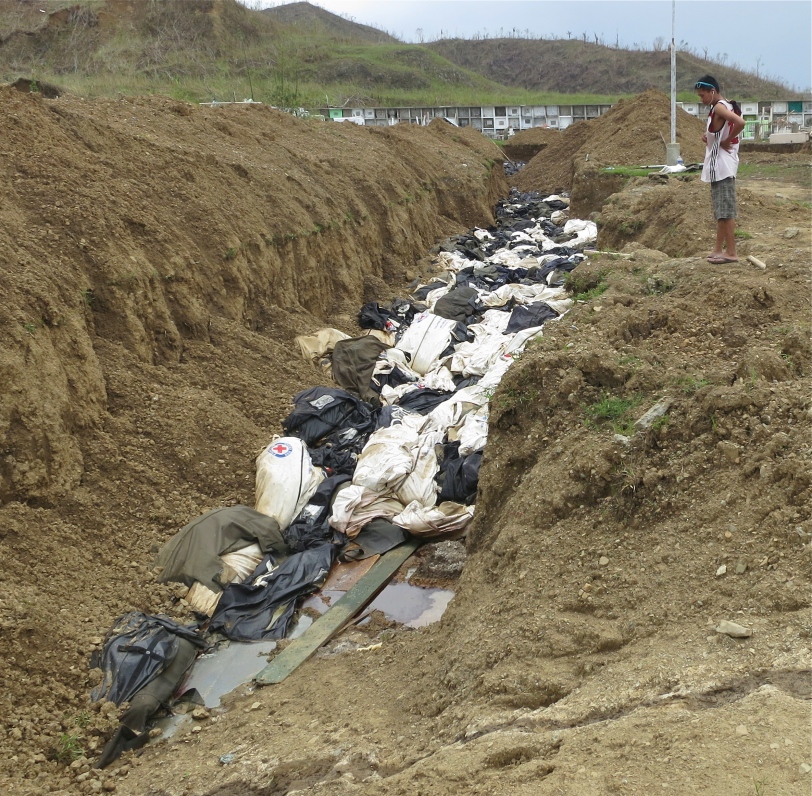 I feel indelibly disturbed and deranged. No amount of prayer, or concentration on work, can remove this new stain upon my memory. I feel very alone in the world, even with my valiant trike driver. What misfortune or bad karma must a person accrue to end up in a mass grave? Is this where I’ll be someday? Why should I be any different from these victims of global warming, which affects all of us?

Troubled by dark thoughts, we journey in the rickety tricycle under ominous skies past a few newly-discovered corpses lying along the roadside. Hungry, sickly locals stand in front of their damaged homes, pointing the way to Santo Nino. 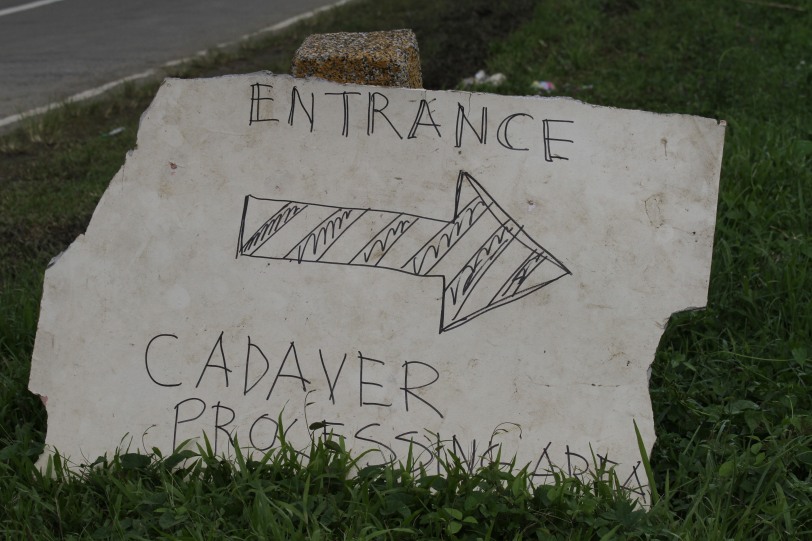 The bodies, in white or black bags, lay in the grass near or under a sign saying “I Love Tacloban.” There’s no room yet to bury them, and loved ones are still coming in the hope of identifying them. The effort to invoke civic pride, and cover up the corpses in bags, cannot overcome the sheer horror of bloated, blackened, decaying vessels of bone and flesh gathered around us. 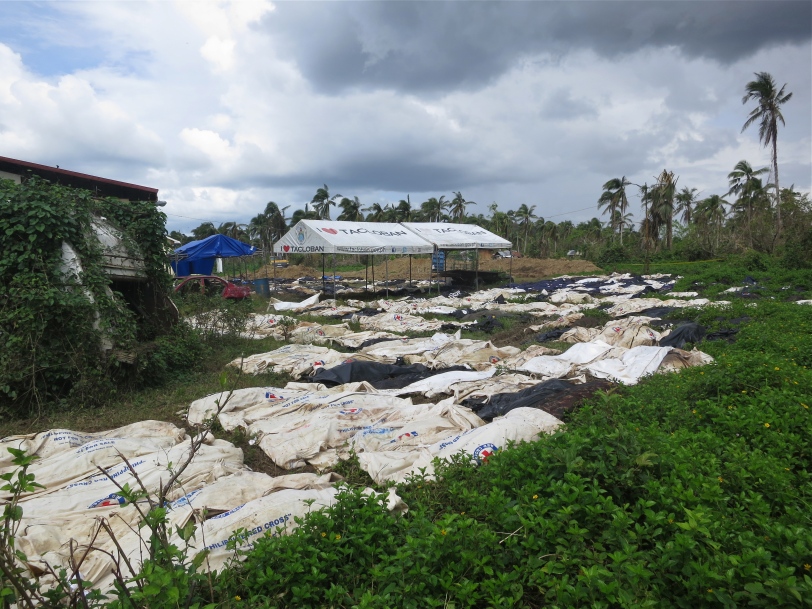 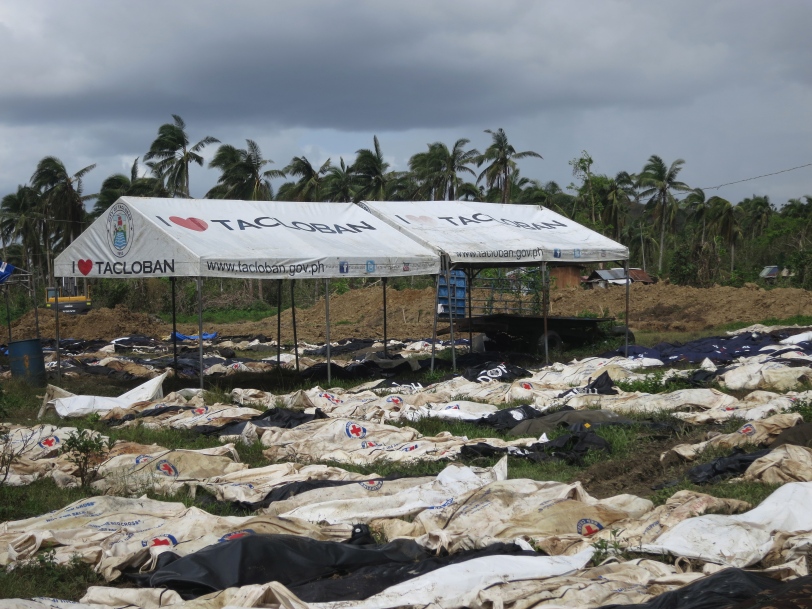 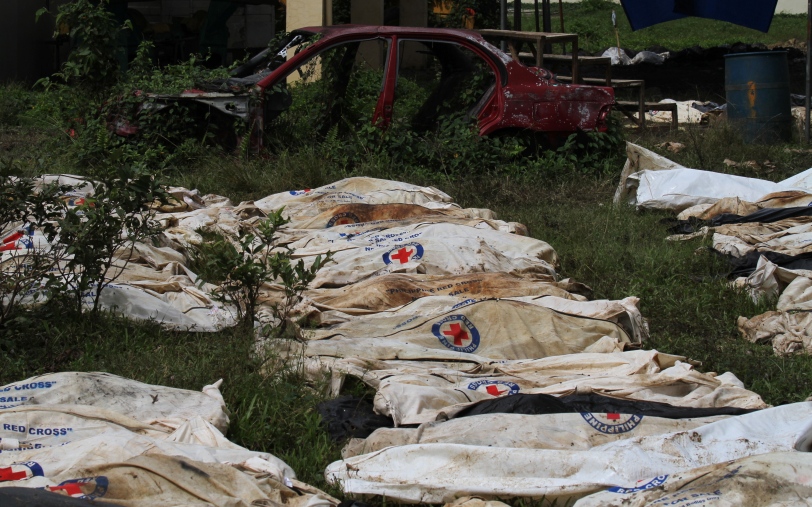 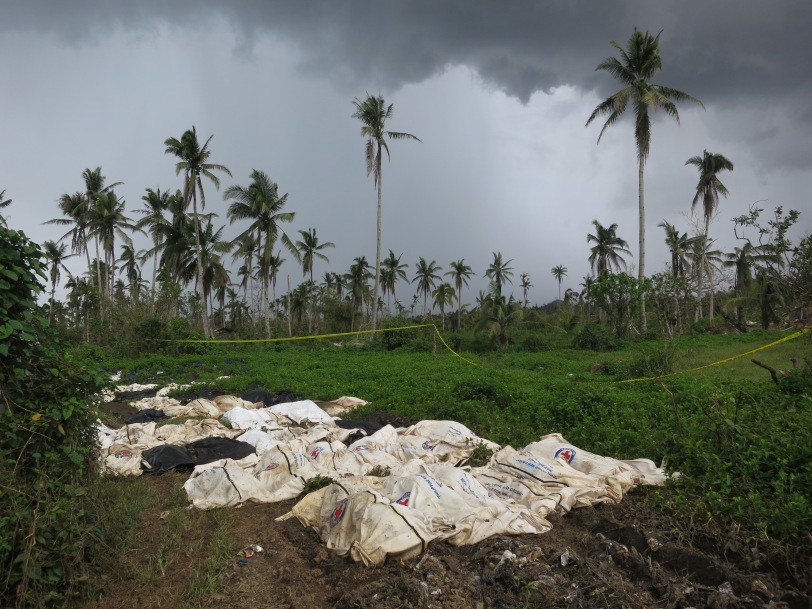 With rain approaching, Gilbert Malate, wearing shorts and boots, steps over and around bodies. “I couldn’t stand the sight and smell at first, but eventually I got used to it,” he says, without gloves or a mask. 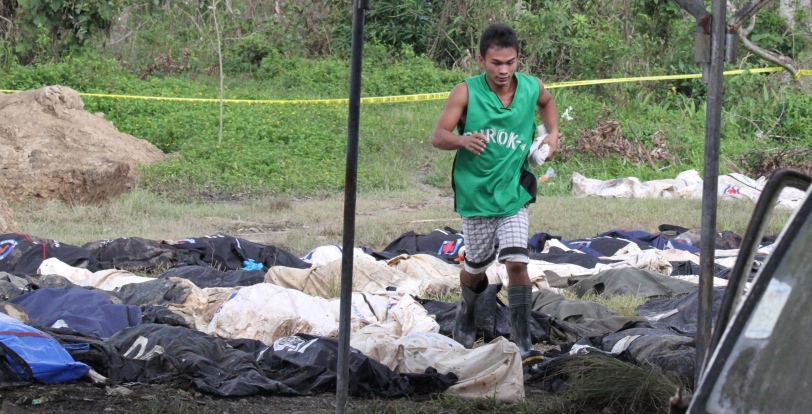 The rain pours down on the bodies. The rain sees no difference between humans, plants, soils or heaps of compost. The rain falls on all.

Unlike the resilient Malate, I can’t get used to it. After our two-hour tour, I go back to my room at the Primrose Hotel and weep in the darkness. I can’t work for the rest of the day, and not only because of the torrential rain. I take a shower in the dark, and wash myself and my clothes in thick soap. I can’t seem to erase this nightmare from my body or being. I have nightmares. I’m trapped in water, under debris, unable to escape, unable to breathe. The scenery in my nightmares looks exactly like the scenery around us in the real world. There is no longer any difference.

The next day, I wasn’t even planning on photographing mass graves. Yet they appeared, one after another.
At the main Catholic cathedral in Palo, the next town down the coast from Tacloban, a noble aid worker spread disinfectant on a mass grave within the church compound. 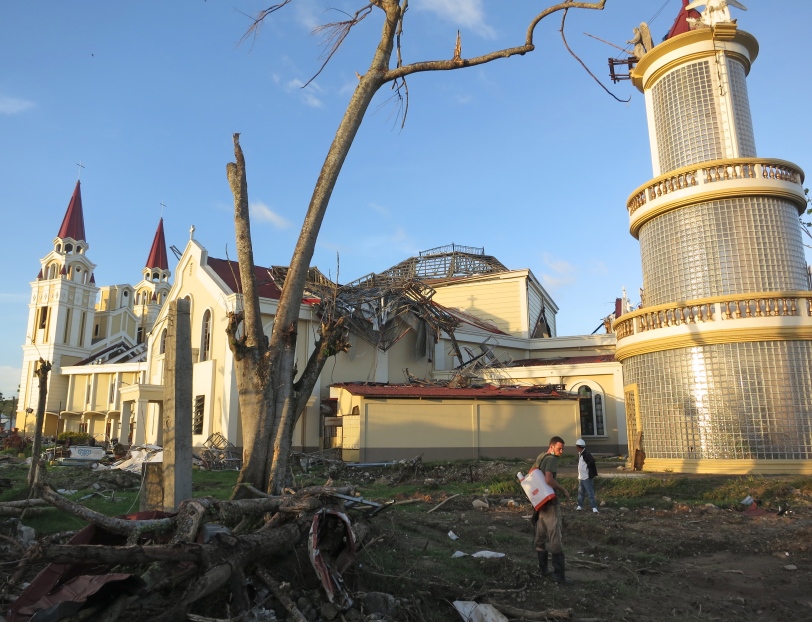 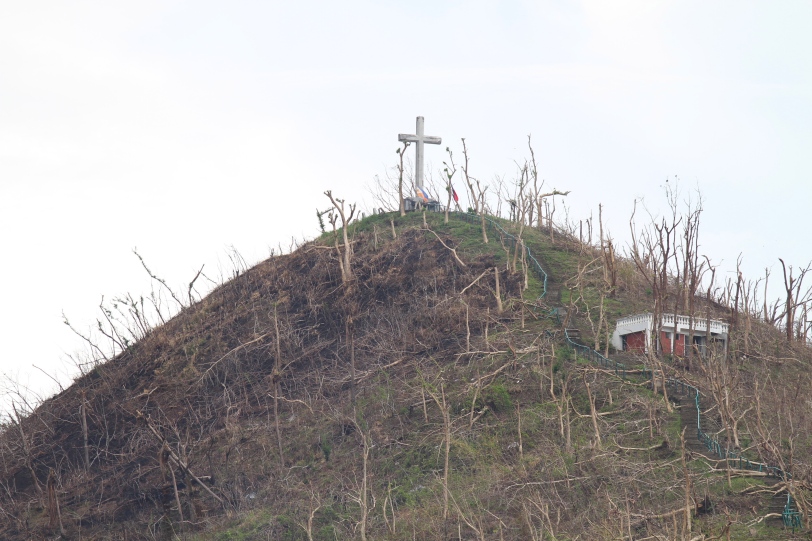 Running out of light, we drove further down the coast, through a swampy death zone of washed out villages and farms. The destruction here seemed worse than Tacloban city. Little had changed. It looked like the tsunami hit a day earlier. 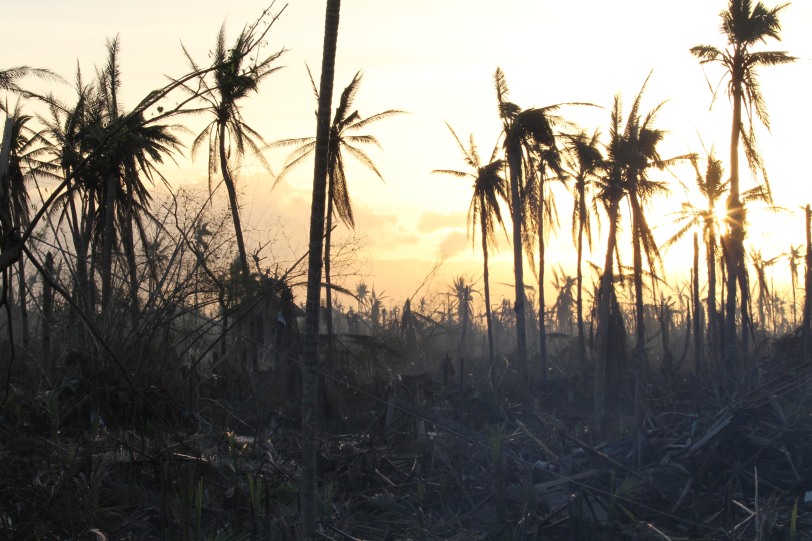 Along the highway, people gathered around a sign at the entrance to Tanauan.

This apparently was the only place in a devastated wasteland where they could bury bodies found nearby.

A boy inserted a cross into the ground. People lit candles at graves and consoled each other in the fading light. 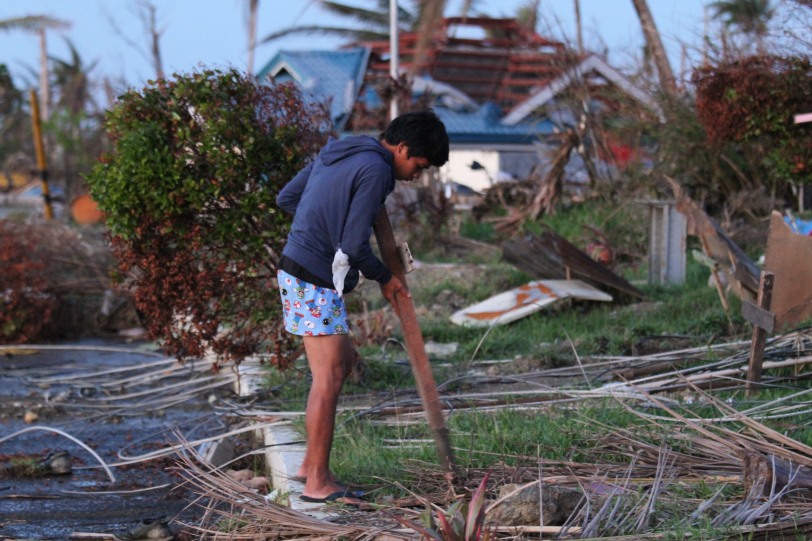 We drove back on a lonely road with little traffic. People lit fires to burn off debris and illuminate a pitch black night without electricity. 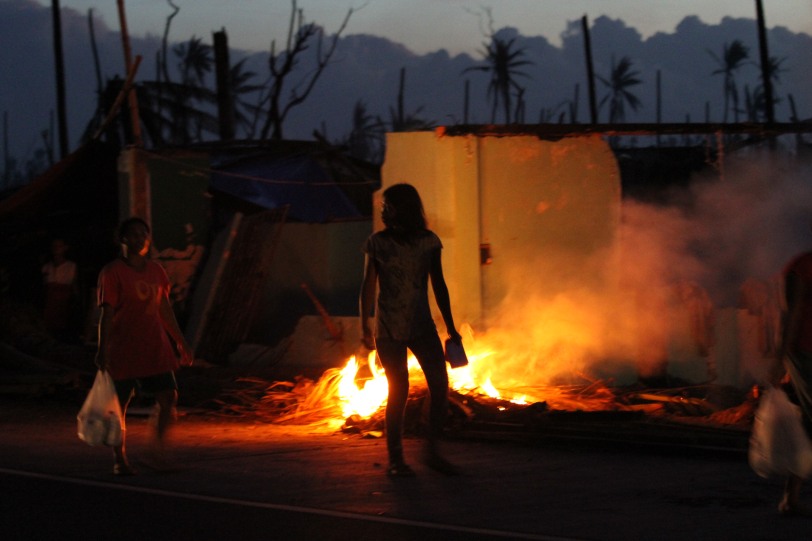 The next day, a group of us went back to Palo, Tanauan and Tolosa.  There were colorful grave sites at the San Joaquin church in Palo, just before Tanauan. 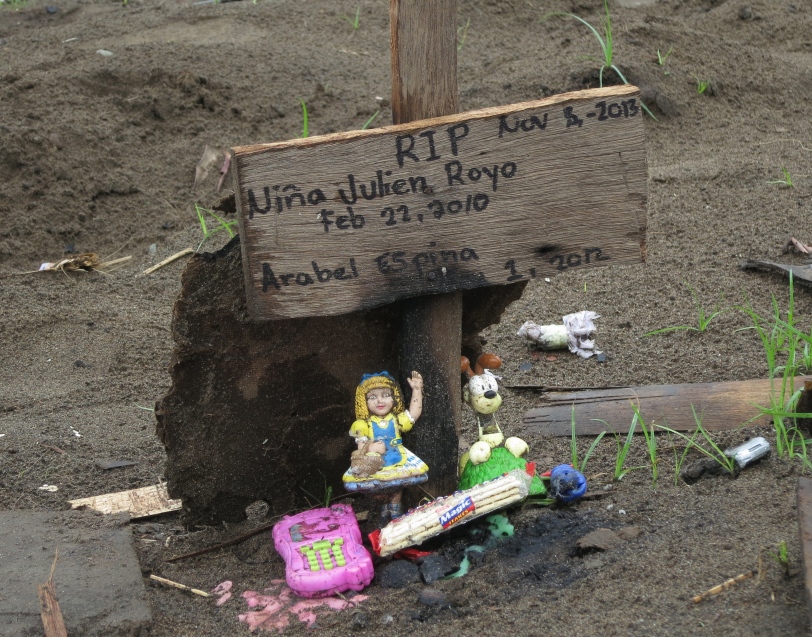 A group came to pray before a sign listing 22 dead from the Lacandazo family. We bowed to them and said “we’re sorry for your loss.” We did not interview them. It was best to let them grieve in peace. How can anyone deal with the loss of 22 family members. 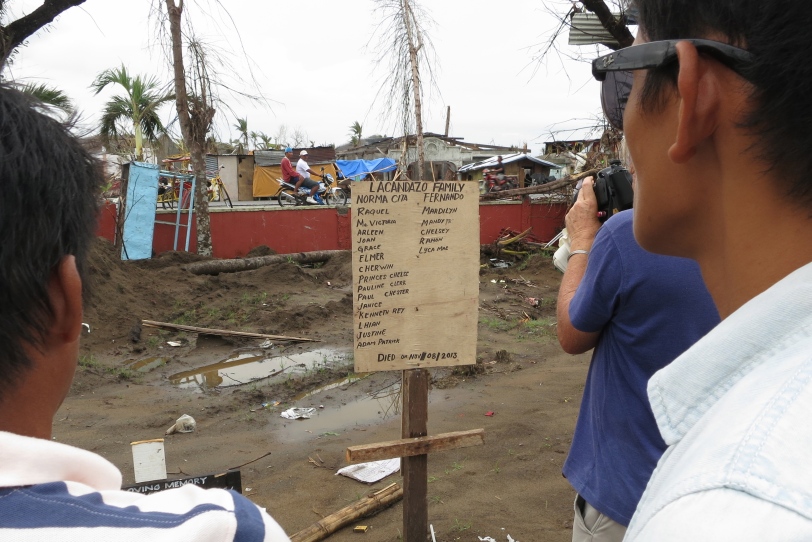 One man stood alone, in disbelief. 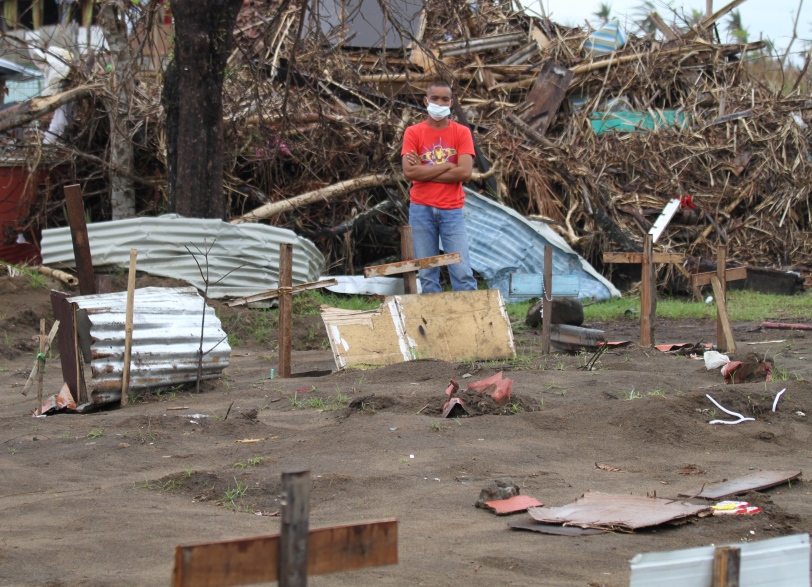 A child, under an umbrella, tried to make sense of the world emerging before his maturing eyes. 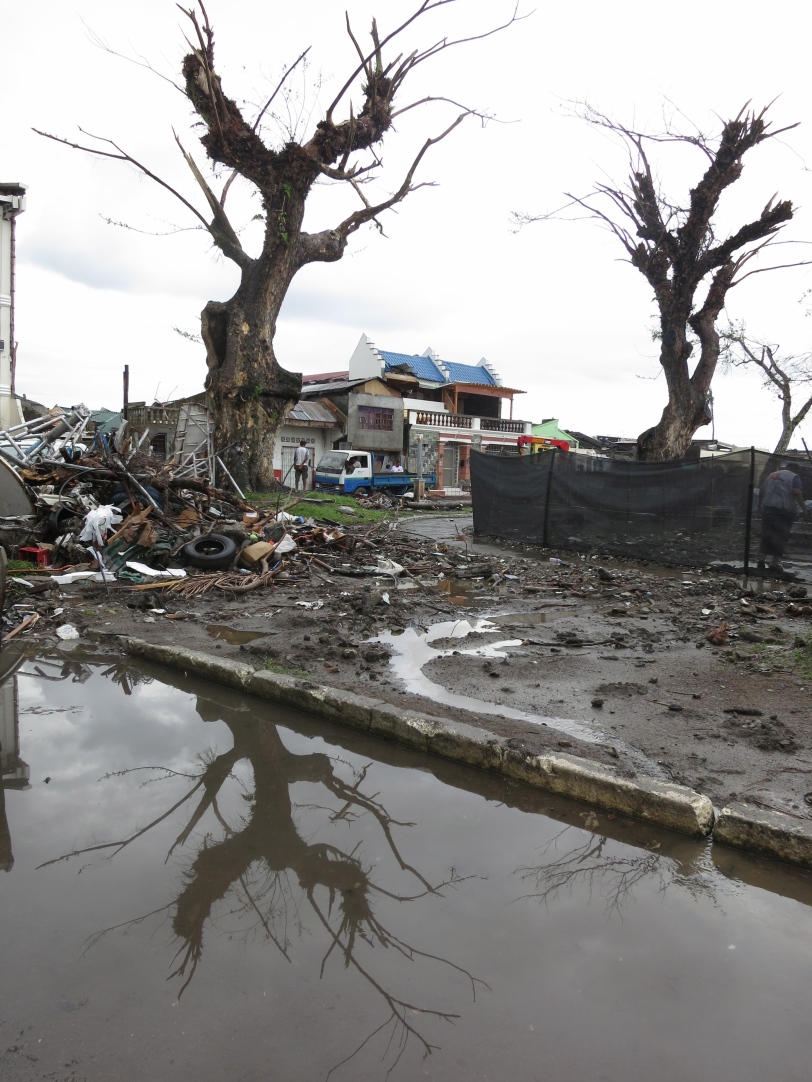 A severe storm followed us to Tolosa, one of the hardest hit areas, directly in the eye of the hurricane.

We smelled fetid corpses in the gloom around us. We didn’t have time to find mass graves there.  We fell silent within this waking nightmare. 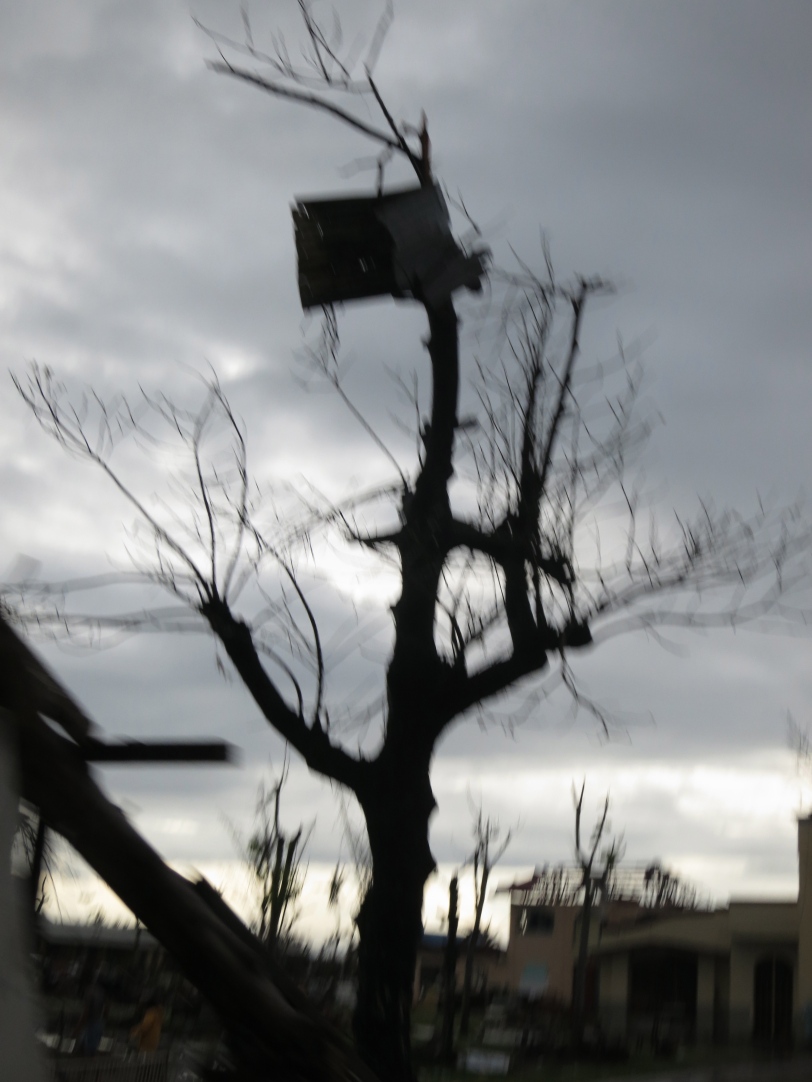 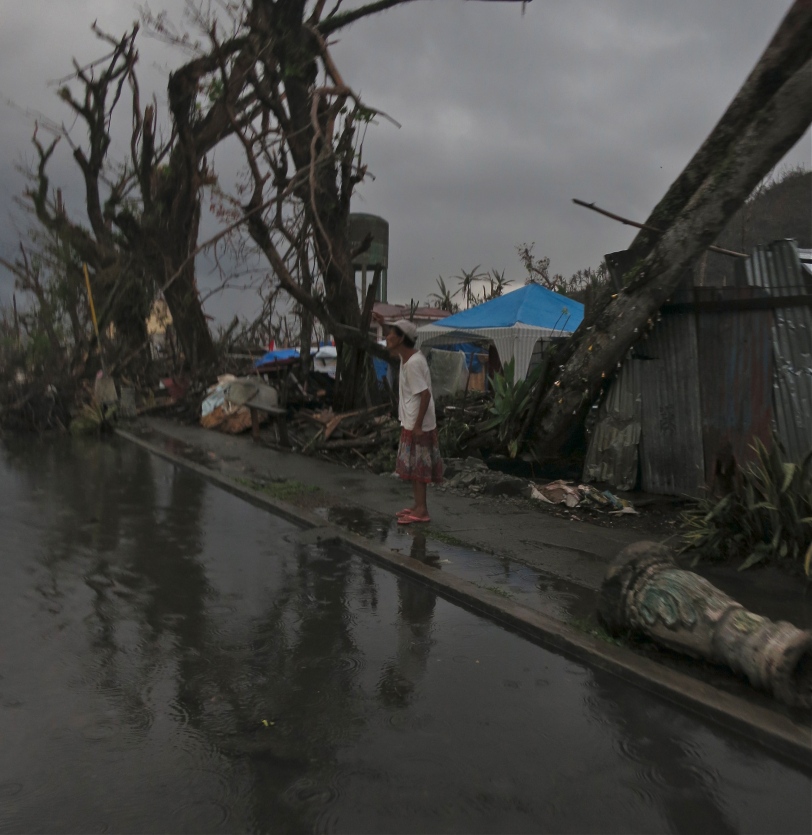 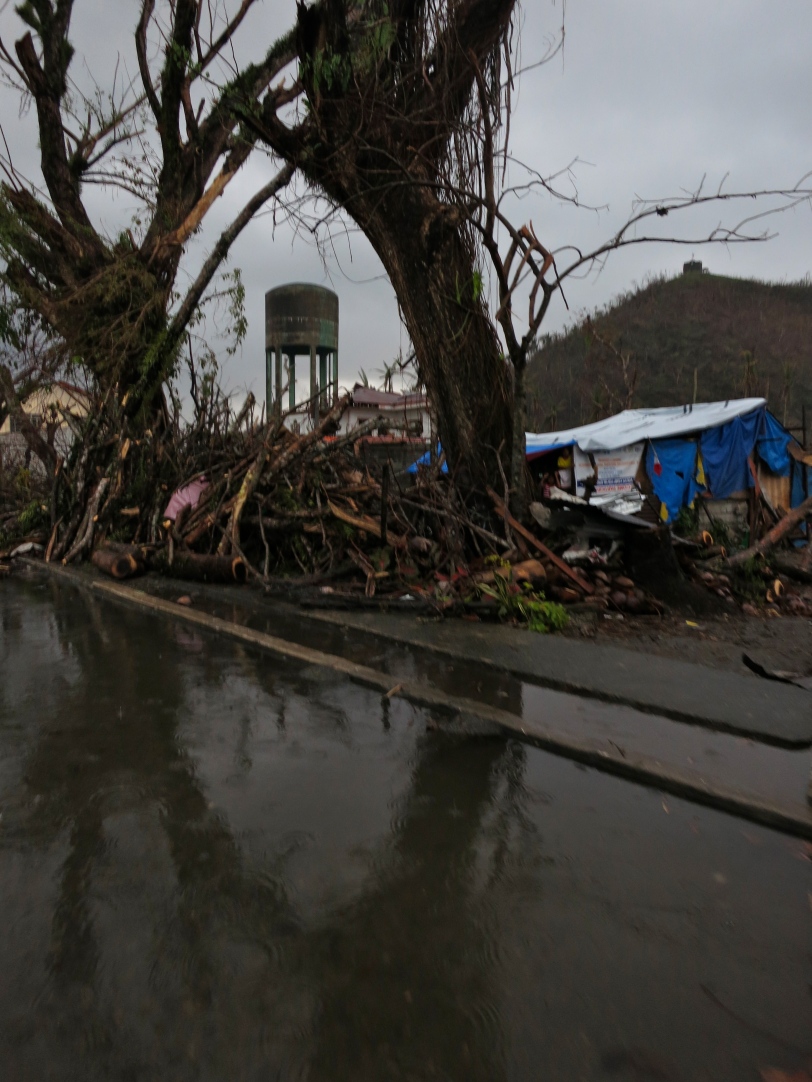 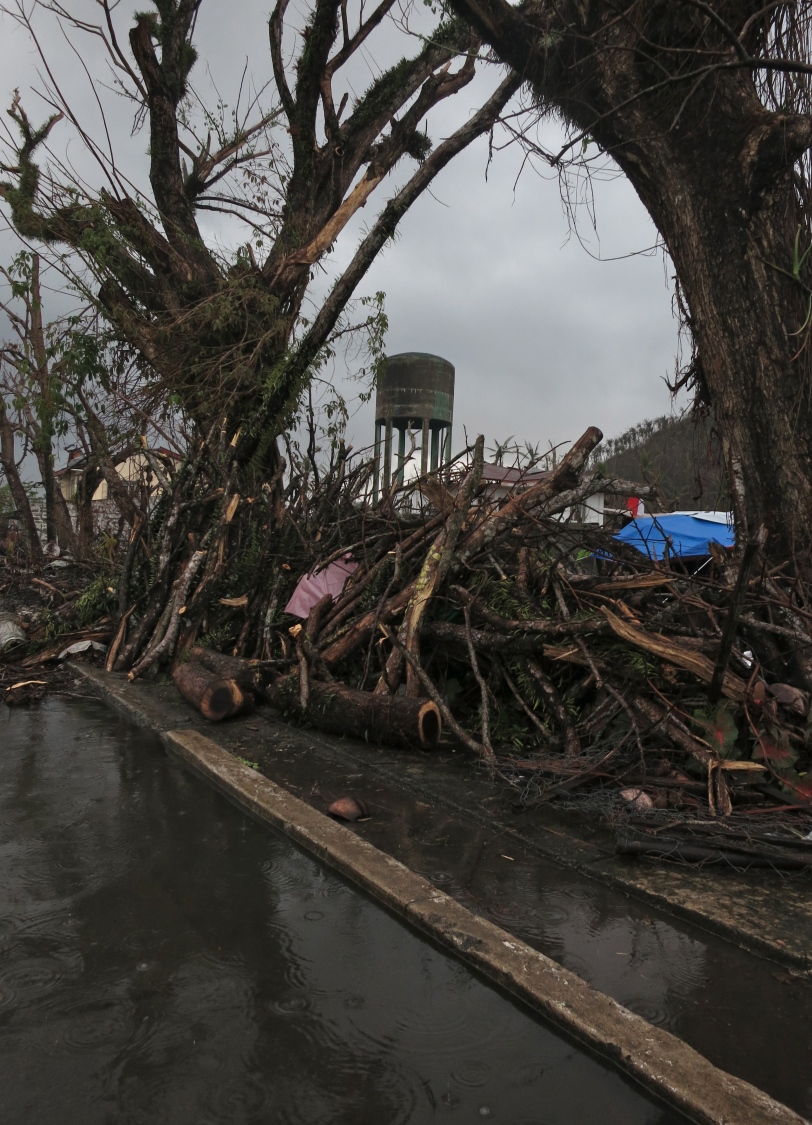 We got out briefly to speak with a family. 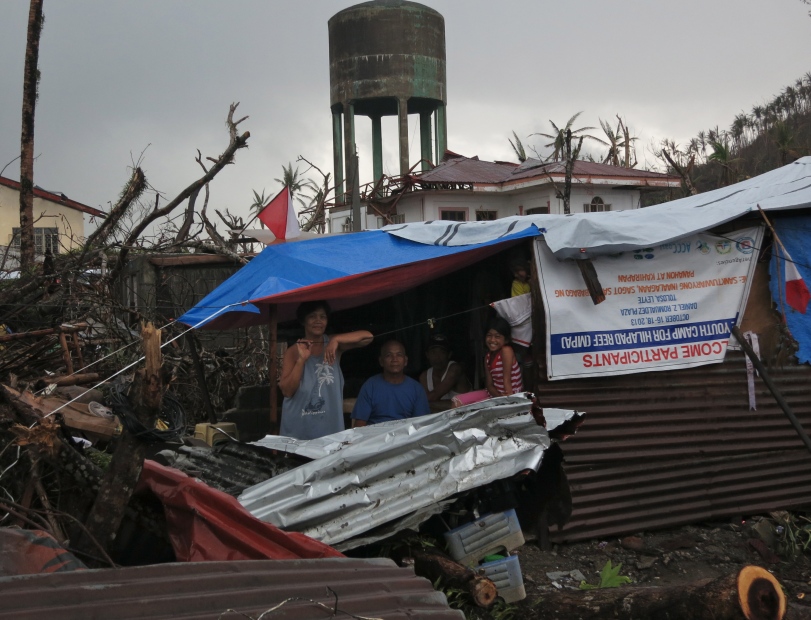 And then we ducked back into the battered tricycle, with no headlamp, for the long ride home in the darkness and rain to Tacloban city. 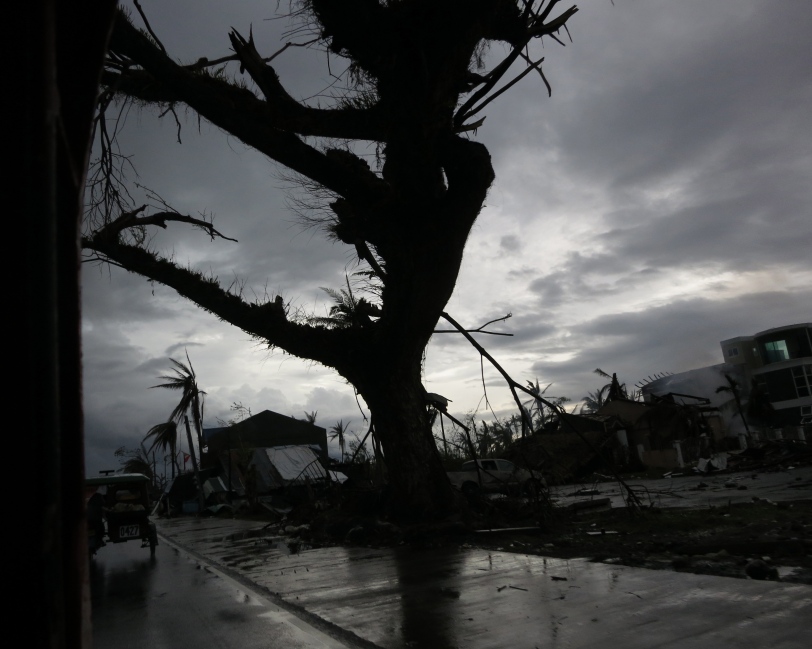 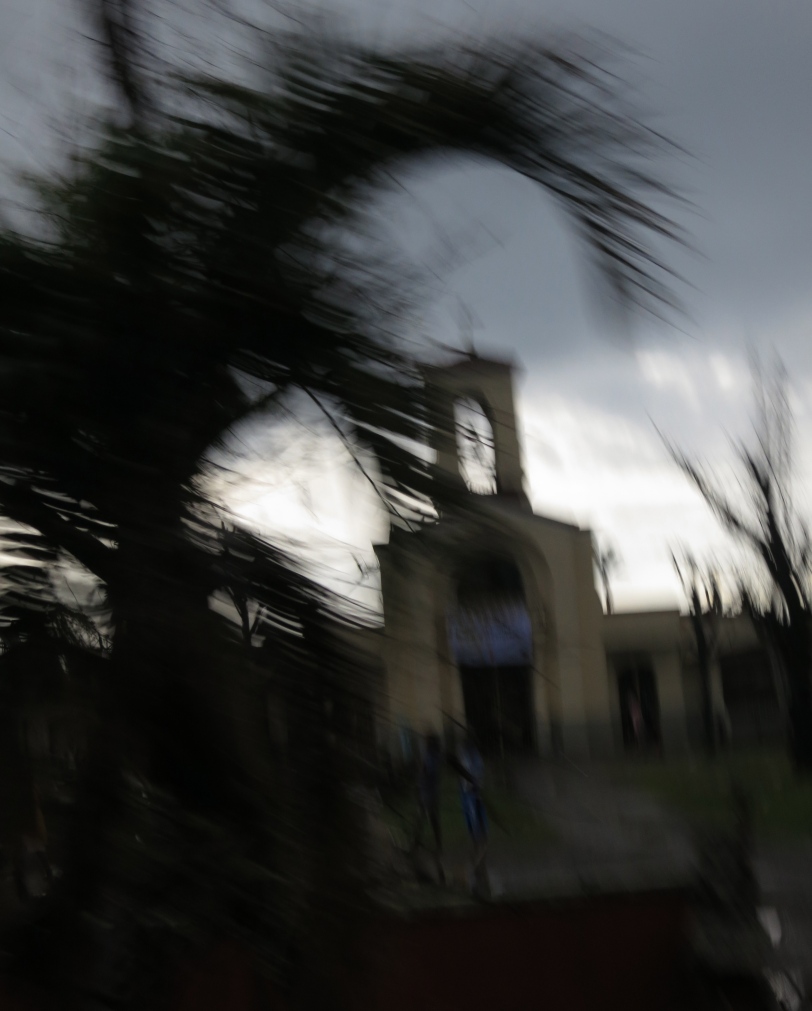