For more than a week now, Leo Garado, 40, and his fellow fishermen have been working hard to repair boats damaged by typhoon Yolanda in order to catch fish to feed their village.

But even as they patch up holes and become seaworthy again, they still can’t catch fish, because they can’t buy fuel, which has risen by 5 times, from 50 pesos per liter before the disaster to 250 pesos now.

It’s not only because of scarcity. The fuel is often there, stored in tanks under gas stations that are reopening, and attendants work hard to pump it out by hand, due to lack of electricity. But Garado and others blame the national government, and greedy fuel companies, for exploiting a national crisis and hampering relief efforts.

“We’re ready to fish, but we can’t afford gasoline,” says Garado, sawing, hammering and filling a hole in the side of his little boat. “The government should do something to control the price.”

Local authorities in Guiuan echo their concerns, but feel unable to influence national politicians and fuel companies that have wealth and political clout. Recti Melquiades, a senior official in Guiuan, says he asked the president’s advisors, who visited here on Sunday, to do something about the fuel situation. “It’s the biggest problem,” he says at city hall, which is damaged like every other building in this municipality of 47,000 in eastern Samar. “We are getting donations of food and water and medicine, but we can’t distribute it without fuel for trucks. This is why the more remote villages still aren’t getting enough.”

Sulangan is particularly vulnerable. From Guiuan municipal hall, it takes a motorcycle about an hour to drive on a paved road cluttered with blown down electrical poles and wires and thousands of decades-old coconut palms which snapped like toothpicks in 350-kilometer per hour winds on Nov. 8. On the morning of Nov. 19, a pair of journalists and local helpers saw no only two trucks and a handful of motorcycles on the road to Sulangan, at the far end of a peninsula where a tsunami-like sea surge washed out surfing resorts popular with Australians and others.

In Sulangan, little has changed since disaster struck 11 days ago, affecting 798 households, killing three, and leaving 25 missing and 54 injured, according to figures posted on the wall at Guiuan city hall. Massive trees, which withstood typhoons for centuries, lie splattered in a school ground, where young men play basketball amid the backdrop of mutilated palms. Every home or shops lost roofs, windows and doors, which many jerry-rig together with fishing line. With nowhere else to go, people shelter at churches or in the debris of their homes.

They also spend a lot of time waiting in line for food. They now hold yellow cards issued by the Philippines Red Cross to each household.

After waiting about an hour, one mother left with a small plastic bag in her hand: some noodles, canned sardines and about two kilograms of rice: barely enough to feed herself for one day, let alone large extended families common in this mainly-Catholic country of 98 million people. 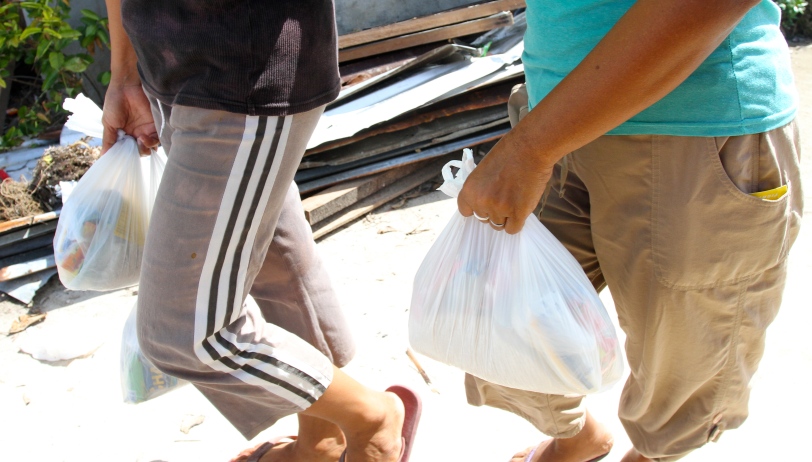 Faced with chronic food shortages, one local fishing family, who would normally feed the community with fish, dispatched their daughter to look for food just days after the disaster. 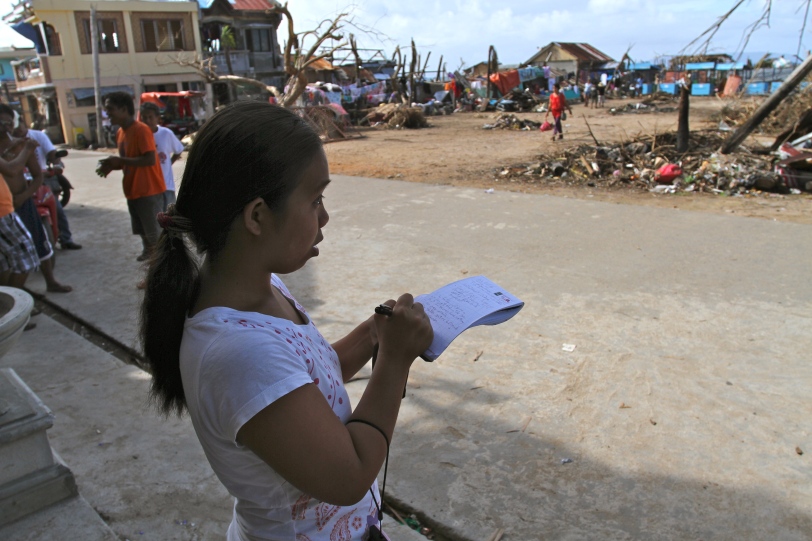 Camiel Padel, a single mother of two infants, went all the way to Manila. A businessman in Pasay, who once employed here as a maid, gave her 5000 pesos to help her family. After a long wait for a C-130, she crammed into the cargo hold and brought enough back to feed her own extended family, a noble effort which also made neighbors envious. Pitying her neighbors, she’s made two more trips to Manila, using free C-130 cargo flights as a form of long-distance commuting. She says she’s been able to feed about 1000 people, but it’s not nearly enough, even as international agencies fly in food to the region.

“My father is a fishermen, we can get food in the sea,” she says near a white-sand beach. “If my father can catch fish, he will give it to other families. He’s trying to go fishing two times a day now, if he can. But the farmers have lost everything and they have nothing. They have no more coconuts, and it might take 5 or 10 years to grow new ones. We have to find a way to feed them now, and for many years.”

It’s a daunting task. Uprooting even one coconut tree is challenging. Millions were ruined in the storm, resulting in crop damages that will last years. These farmers and laborers, who long enjoyed a seemingly endless bounty of coconut meat and juice from stubborn old trees, now write signs such as one declaring: “We are alive. NGOs, please help. We need food.”

It’s a refrain seen and heard across a disaster zone stretching across several islands from east to west through the central Philippines. In northern Cebu province, hundreds of mothers and children line the roads between Bogo and Daan Bantayan, begging aid convoys to stop for them instead of barreling to remote coastal areas where desperate villagers swarm aid trucks.

Garado, who graduated from high school, worked as a security guard in Manila before returning to his native Sulangan only a month before the storm. “When I came back here, I didn’t expect this to happen.”

Abandoning his tiny thatch hut, he rode out the storm with in-laws in a concrete building, while others sheltered in churches and schools that soon lost windows and roofing.

“You don’t think you can ever see such things in your life,” he said, recalling the storm. “I didn’t think we could survive. Now, it’s back to zero for us.” 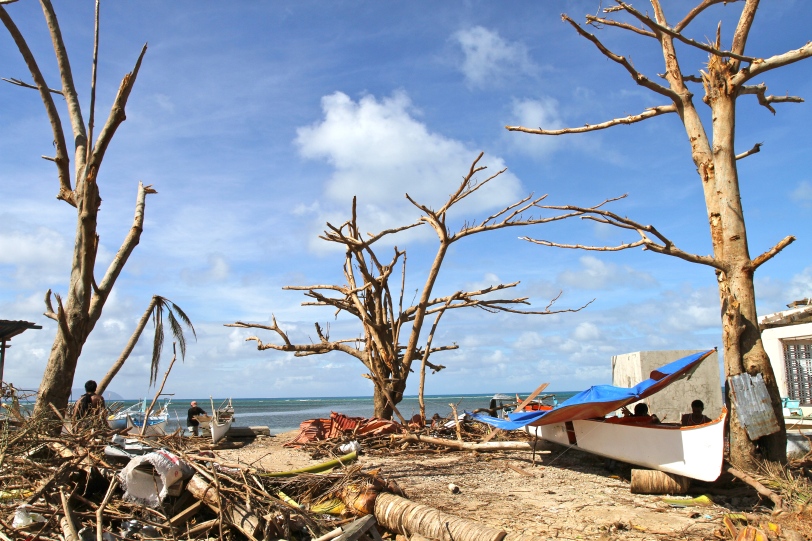 The storm wrecked much of the fishing fleet across the central Philippines, and his boats as well. He spent a week repairing them, and various homes, before he could fish again. Now, he says he could catch 30 or 40 kilos per day, if only he had enough fuel.

“Now, the important thing is to build a house and look for work, maybe in construction or with international relief agencies. I know how to organize people, and distribute things directly to people. That’s what we do with fish markets. If you give goods to the government, it will become corrupted. We can already see how long it is taking. We think the government will not give us a livelihood program. Now we need to receive support directly from the agencies.”

“If I can finish this boat, maybe I can take it to the US warships to ask for supplies for victims. But we have no gasoline. That is the problem.” 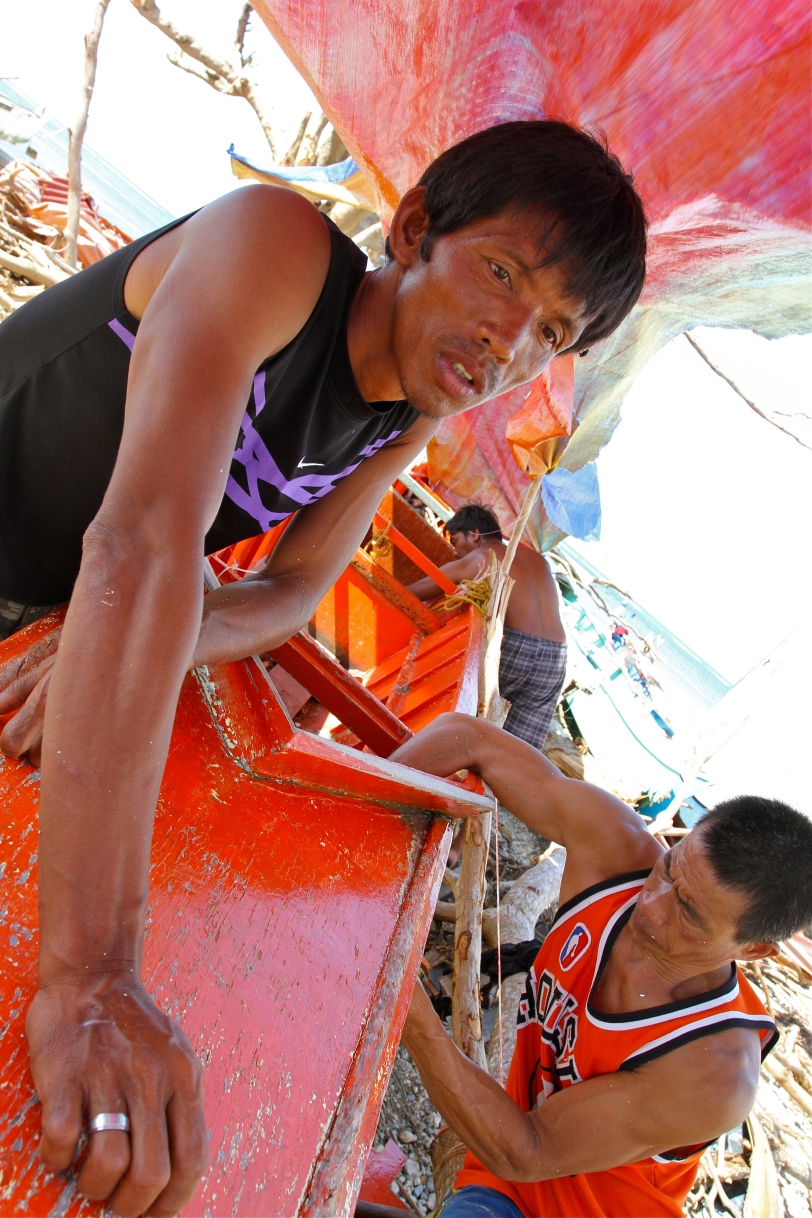