Noel Gallagher: After the Champagne Supernova

Noel Gallagher faces one of the biggest challenges in the life of a musician: what to do after the break-up of your famous band.

Like other high flying rock stars, Noel has a lot of room in the sky under him to fall.

To his credit, he hasn’t faded out of the spotlight.

He’s embarked on a solo career, recording and performing songs that please some of his diehard fans while disappointing others who long for the glory days of Oasis. It’s nearly impossible to satisfy Oasis fans who want to belt out songs word for word in unison and relive their memories of the 1990s.

His new act, Noel Gallagher’s High Flying Birds, doesn’t have the power or swagger of Oasis.

He doesn’t seem thrilled to be on a solo career, though his comments to fans are polite, grateful and appreciative.

Unlike the brash posturing of the 90s, Noel seems almost reluctant to appear on stage. Wearing a shirt and jacket, he often stands in the dark in the dark spaces of the world’s biggest stages. The emphasis is on modesty, not stardom.

The band appear close together on stage, more like a folk troupe than a super group. Noel seems to spend more time strumming an acoustic guitar than ripping out searing solos.

Compared with his brother, Noel’s vocals have the aspect of Pete Townshend, lacking the pipes of Roger Daltrey. Noel’s singing, which some might call weak or lame, brings out his dreamy, whimsical side, without the bravado and attitude of Liam. The audience hears Noel’s songs probably the way Noel heard them.

In this incarnation, Noel is more like Bob Dylan or Neil Young, a singer/songwriter with a knack for simple, meaningful tunes.

At the Frequency Festival in Austria, he played only one famous Oasis song, Don’t Look Back in Anger. The message: Noel is not looking back. He’s going forward. Even if that means going solo. 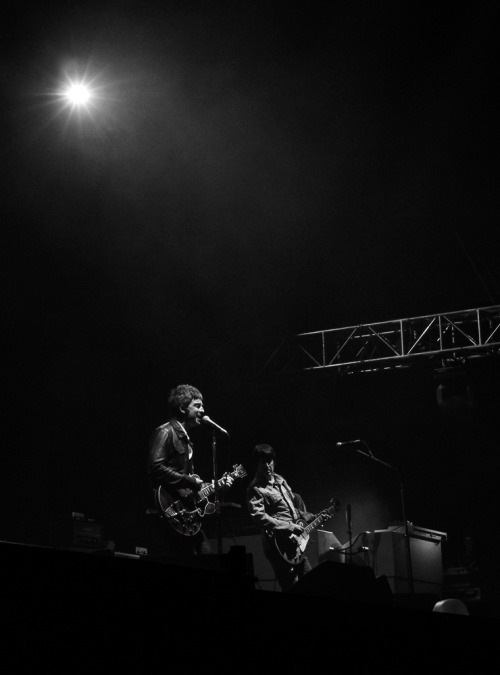