Another delay, another band entertains passengers at Toronto’s Pearson airport.

Last night, The April Fishes, a band from San Francisco passing through Canada en route to concerts in Romania, Hungary and Greece, found themselves among passengers stranded overnight at Toronto airport waiting for flight 876 to Frankfurt.

Inspired by Lemon Bucket Orkestra, the April Fishes took out their instruments and performed their songs for about a hundred weary passengers standing in line for hotel vouchers between 3 and 5 am. Passengers, and Air Canada staff, including employees called in on a few hours to sleep, seemed relieved to hear music in the airport in the middle of the night. Passengers clapped, and a group from Calcutta, led by singer Subhamita Banerjee, took souvenir photos and joined in. 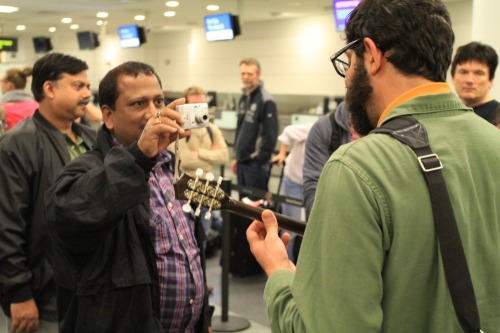 The incident shows Toronto’s growing affection and tolerance for impromptu performances in public spaces. Yet it also highlights problems involving Toronto’s airport and Air Canada, one of the world’s most respected airlines until recent labor and management disputes.

I was set to fly from Toronto to Frankfurt and then Warsaw tonight at 10 pm out of Pearson. After delaying our 10 pm flight to 11:20, 2 am, 2:30 am, then 3 am, Air Canada finally cancelled the flight, due to what they called a fuel leakage (just a minor problem that could have landed us in the Atlantic.) My 11-hour flight would become a 40-hour ordeal showing the worst side of airline mistreatment of passengers.

Blanka Kowalczyk, a judge in Poznan, Poland, believed in Air Canada’s reputation enough to fly with her husband Marcin Susek and their two-year old daughter to visit relatives in Vancouver.

But their return trip to Poland from Vancouver turned into a three-day ordeal showing the worst side of Air Canada service.

“It was crazy, everything went wrong,” she said while waiting in line in Frankfurt. “We all spent too much time at airports, standing in line, waiting for information and new boarding passes.”

Disorganized and overwhelmed staff gave her conflicting information about her baby stroller, meaning she had to hold her infant for hours while standing in line-ups, she said. Confused, beleaguered staff in Toronto and Frankfurt couldn’t figure out new connections, she said, and they refused to upgrade them to business class, citing strict adherence to rules.

“They talk about rules, but they are the ones who are breaking the rules,” she said. “In Europe, people know that you can get money if the airline is late and messes up your schedule. But maybe in Canada people don’t know that. If people complain, Air Canada would have to organize better.”

Mrs. Kowalczyk and other passengers said they are considering taking legal action against Air Canada’s alleged mistreatment of passengers.

Normally based in Tokyo, my supposedly 11-hour trip from Toronto to Frankfurt and Budapest became a 40-hour ordeal, showing the worst side of Air Canada service. Others had it worse. Rupa Marya and her band April Fishes started their journey Wednesday morning in San Francisco, and had to reroute through London in the hope of arriving in Bucharest, Romania on time for their Friday night concert. Indian vocalist Subhamita Banerjee and her group, facing perhaps a three-day journey, wondered if they would make it in time for their Friday night show in Calcutta.

Kelly Chen, a student from North York, missed at least the first day of her much-anticipated three-day stay in Istanbul, Turkey. Johanna Kunz, returning from a holiday in Los Angeles, had to miss work near Frankfurt. A wedding party feared they would miss a ceremony in Germany.

“We thought it would be cool to save 50 bucks by flying through Toronto,” said Misha Khalikulov, a cellist from April Fishes. “We’ve played here before and love Toronto. But there’s no excuse for this type of service.”

He and other passengers listed a litany of problems with Air Canada.

They should have provided proper warm meals instead of juice, soft drinks, and packages of pretzels and biscuits. “Normally in Europe, when the delay is four hours, they should give us a warm meal,” said Mrs. Kowalczyk. “Instead, Air Canada gave us crackers and Coca-Cola. That isn’t even food.”

Officials with flags should have led us to the carousel to collect baggage, instead of letting passengers get lost on their own in an empty airport at 3 am.

They should have let all of us sit down while they sorted out hotel vouchers, instead of making about a hundred people, including mothers with children, stand for 2 hours until 5 am just to get a hotel voucher.

And they should have called in and flagged down hotel shuttles, instead of letting people wait outside for 30 minutes or more.

At some hotels, passengers arriving at 5:30 am were told they had to check out at 11 am. At one hotel, staff told guests that they should call Air Canada on their own and demand the airline pay extra to let them get a proper sleep.

On Thursday afternoon, dozens of sleep-deprived passengers still couldn’t get information or new boarding passes to their destinations. An Air Canada ticket clerk told me that AC staff in Frankfurt would sort everything out. But Frankfurt was an even worse mess.

I was set to fly from Toronto to Frankfurt and then Warsaw tonight at 10 pm out of Pearson. After delaying our 10 pm flight to 11:20, 2 am, 2:30 am, then 3 am, Air Canada finally cancelled the flight, due to what they called a fuel leakage (just a minor problem that could have landed us in the Atlantic.) Passengers complained because AC only gave us pretzels, biscuits, juice and pop while we waited about 7 hours at the airport.

“Normally in Europe, when the delay is four hours, they should give us a warm meal. Instead, Air Canada gave us crackers and Coca-Cola. That isn’t even food.”

After getting our bags, we then waited in line about 2 hours to get hotel vouchers. I just got to my hotel at 5:45 am, told check out time is 11 am. Scheduled to fly tomorrow at 5:45 pm from Toronto to Frankfurt, then to Budapest late late.

Drivers and hotel staff told me Air Canada is doing this to passengers “all the time”. The ground staff, who are on the front lines and not making the decisions behind the scenes, were helpful, but overwhelmed. Only 3 staff at first, overnight, dealing with about 100 (or more) bewildered passengers, all with connections messed up out of Frankfurt. AC then called in a few more people after 3 am. Instead of letting us sit down while they handed out vouchers for hotels, we had to stand in line about 2 hours in the middle of the night to get vouchers, one by one, at the counter because of their accounting process. With vouchers in hand, a group of us waited outside the airport for at least half an hour for shuttle buses to hotels. Many people slept less than five hours, and tried to catch more shut-eye in hotel lobbies.

After getting our bags, we then waited in line about 2 hours to get hotel vouchers. I just got to my hotel at 5:45 am, told check out time is 11 am. Scheduled to fly tomorrow at 5:45 pm from Toronto to Frankfurt, then to Budapest late late.

Once aboard the rescheduled flight, passengers sweated in high heat for at least 30 minutes. Flight attendants didn’t pass out water. An announcement came on, saying the back-up system wasn’t working, and passengers should open the air vents. Passengers couldn’t find the air vents. Finally, as the engines came on, pumping in cooler air, the plane took off, and a few passengers cheered in ridicule.

The promises of Air Canada staff in Toronto proved false once on the ground in Frankfurt. Only a single overwhelmed woman, a stalwart German lady refusing to bend strict rules, dealt with a long line of bedraggled customers. For 3 hours in Frankfurt, I went through 8 people at four desks until finally, a kind young German woman at the Lufthansa desk, feeling sorry for a deranged Canadian, gave me a ticket to Budapest via Vienna. Lufthansa’s service was excellent, just like what Air Canada used to provide.

By the time I reached my destination, my 11-hour trip had become a 40-hour ordeal.

As for Rupa and the April Fishes, they were stuck in London, wondering if they would make their Friday night concert in Romania on time.