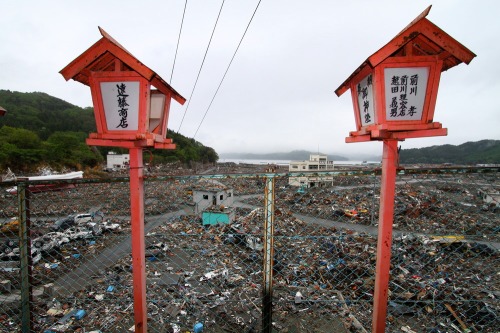 OTSUCHI, Japan | On a misty Sunday morning, a cloud of fog seems to hover like a halo over the temple.

For many locals who come to worship here, the temple seems to have magical powers. The March 11 tsunami rushed up a slope to the steps of the temple grounds and then turned back, dragging thousands of people and buildings with it back into the ocean. After that, an inferno of exploding fuel from canisters, cars and gasoline stations engulfed most of the town, where local officials said they can confirm the whereabouts of only about 6,400 of the town’s 15,000 residents.

Though flames leapt up the mountainside and scorched the trunks of trees encircling the temple grounds, the fire stopped before reaching the main wooden shrine — which has been periodically rebuilt, according to Shinto custom, for more than 1,000 years.

“No firemen came here to put out the flames. God was protecting the temple,” said Takaaki Goto, 74, a city councilor and former geography teacher who survived the tsunami that killed the mayor and 31 other town officials. “I’ve heard people say that Japan is a country without God. But if you look around, you can see that God protected many things.”

The tsunami and fire gutted his new home across the street, but his most treasured possession — a small shrine containing the ashes and scrolls of his ancestors, who have been living in Otsuchi since the 17th century — survived.

Like Mr. Goto, many who lost their material possessions are turning to spirituality to comfort them in hard times. On the other side of Otsuchi, the tsunami blew apart a 35-foot-high wall and obliterated the port, fish processing factories and hundreds of homes in the Ando district. The ocean, attacking in a series of three waves, grew to 50 feet in height, chasing about 130 people up a staircase to the hilltop Inari shrine.

One of the most important buildings in Otsuchi, the shrine complex holds festival gear, including lanterns, masks and the area’s “mikoshi,” a heavy gilded spirit house that residents carry on their shoulders as they chant and parade through town every autumn. The complex is built around giant trees that people have been preserving for centuries.

The tsunami crashed against a concrete wall fortifying the hillside and mangled a guardrail and fence as it climbed the stairwell. Somehow, it stopped at the foot of a passageway lined with traditional lanterns. The ancient trees and shrines, though less than a mile from the ocean, survived intact, seemingly untouched by perhaps the strongest earthquake and tsunami in Japan’s long history.

“I saw everything,” said Toku Juoudate, 74, whose family has been looking after the shrine for 23 generations. “The tsunami pushed the boats along with it, and the boats tore the roofing off houses. The tsunami swept people away who were standing on rooftops. My son yelled for everybody to come up higher, and we all survived because God protected the temple and turned back the tsunami,” she said.

In a region prone to earthquakes and tsunamis, wise elders have constructed and preserved Shinto shrines, Buddhist temples and Christian churches on slopes and hilltops, which have stayed above the reach of tsunamis in 1896, 1933, 1960 and on March 11 this year.

Among the few intact buildings, they have become havens for evacuees who lost their homes and other worldly possessions. Mrs. Juoudate said 70 of the people who fled to her temple are still sleeping on the tatami mats of a ceremonial meeting hall. “People are tired and cranky, and they are losing patience and sometimes arguing, because it is crowded and noisy at night with coughing and snoring. But this is a temple, so people are trying to stay peaceful,” she said.

Not every temple, however, has been so lucky. The tsunami swamped the Koganji temple at sea level at the foot of a mountain in the central business area of town. A demolished car lies in the gutted ruins of the temple’s main hall, where flowers and Buddha statues preside over a wasteland of devastation.

Locals say the temple’s keepers did not always follow strict religious codes. Many evacuees died in the temple instead of running up a hillside path through the cemetery behind it.

Tomoko Nakamura, 32, said her parents and grandmother fled from their home across the street to take shelter in the temple. She has not seen them since and continues to search for their bodies, although she knows that they probably were swept out to sea.

Staying at a shelter on higher ground a few miles from the sea, she goes back to the site of her home almost every day. Nothing remains except a traditional “Kura” storehouse made of stone, dating back to before Japan’s modernization in the 19th century. Though the waves toppled tombstones, she believes her ancestors are resting peacefully in a large grave site of a cemetery, dating back more than 300 years, next to the Koganji temple.

Like many Japanese, she worships her ancestors, especially during the Bon festival in August, when ancestors come home to visit the living. She said Otsuchi always will be her home, even if she and her new husband end up moving elsewhere for work.

In a rainstorm just hours before the fall of darkness in a town without electricity, she stood in the space that used to be her family room, waiting for her parents and grandmother to return to hold her and speak to her. “I am not scared of coming here,” she said, the lone soul in the charred ruins of the town. “My ancestors are all here to protect me.”

0734– Japanese lanterns at the foot of the Inari Shrine remained just above the water line of the March 11 tsunami that obliterated Otsuchi, Japan.
0708–A fire which engulfed most of Otsuchi town burned the bottoms of trees around the Ko-tsuchi temple but didn’t reach these stone tablets or the main wooden shrine.
0848 – Worshippers have placed Buddha images and other religious objects in the wasteland around the Koganji temple destroyed by tsunami and fire on March 11 in Otsuchi town. 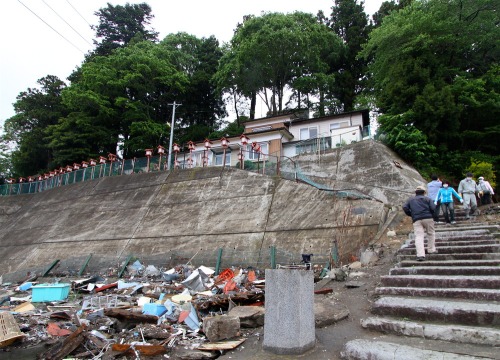 One thought on “JAPAN: Spirits protected temples from tsunami and fires”