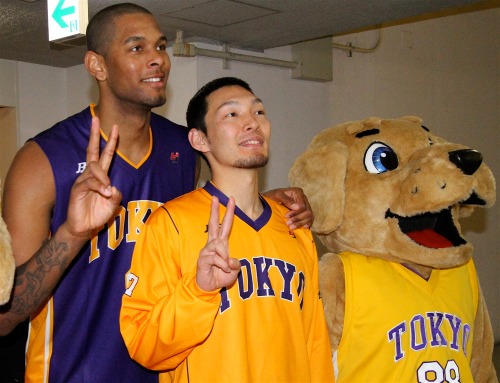 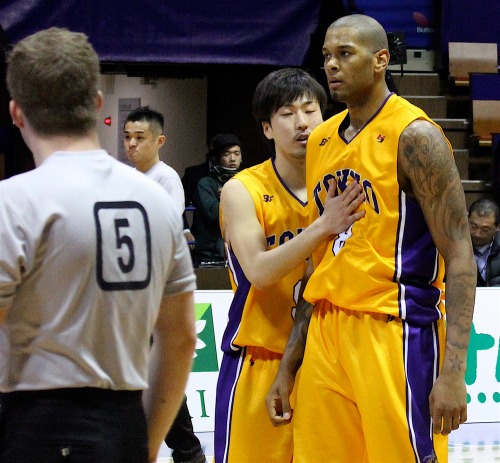 TOKYO — The peaceful vibe of Japanese culture has a way of polishing the edges of many who come here.

When the N.B.A. prospect Jeremy Tyler, 19, signed on with the Tokyo Apache last July, his baggage included retracting a commitment to play at the University of Louisville, skipping his senior year of high school, signing a $140,000 contract with Maccabi Haifa of the Israeli league and then bolting after little playing time.

Still too young to jump to the N.B.A., he came to Japan for a second chance and to hone his raw skills in a league with former N.B.A. pros and college players from the United States. Under the former N.B.A. and Fordham coach Bob Hill in a season in which he also received advice from older teammates like the former Seattle SuperSonics center Robert Swift, Tyler’s nascent career could be turning around.

“Being in Japan is amazing, especially in Tokyo,” Tyler, a 6-foot-11 power forward, said just days before the March 11 earthquake devastated northeastern Japan. “Everybody is so positive, my coaches, my teammates. There are so many different things to explore here. I’m really enjoying my time here. Basketball is taking care of itself.”

Along with other American players and coaches, Tyler returned to the United States soon after the quake, and he has gone to the Dallas area to continue training with Hill, team officials said. The N.B.A. draft, the first Tyler is eligible for, is June 23. He is projected as a first-round pick on many mock draft boards.

The Tokyo Apache, ’whose season runs from October to May, suspended operations in March, along with teams from Saitama and Sendai. The Japan basketball league reconfigured its schedule for its remaining teams. Several coaches and players said Tyler’s experience in Japan, though brief, could raise his stock in the draft.

For Tyler, a turning point came in early March in back-to-back games in Tokyo against the Akita Northern Happinets. Aggressively scrapping for loose balls and rebounds in the first game got Tyler in trouble with Japanese referees, opponents and Hill, who benched him at key points of a double-overtime loss.

After watching video the next morning, Hill said, he lambasted Tyler and pointed out his mistakes.

“I’ve been really hard on him, really hard, right in front of the whole team,” Hill said. “Maybe he thought he wanted to kill me. I was pretty critical of him during the film session. He took it. He took advantage of the opportunity to learn.”

The next night Tyler scored 24 points in a victory that improved the Apache to 20-14.

“When he talks, you listen,” Tyler said after slurping down some postgame noodles with chopsticks. “Yesterday wasn’t a good game for me. Before this game he yelled at me so hard. You know he’s not doing it because he doesn’t like you. He just wants you to do your best. That’s exactly what I need in my life.”

When an Akita player tripped Tyler, an enraged Hill stood up for him, berating the player and officials.

“It basically shows that he cares,” Tyler said of Hill. “He doesn’t want anybody to walk over you. Coach has been very special for me in my life in the last eight months. I view him as a father, coach, mentor, trainer. He always stands up for us.”

Hill, who mentored David Robinson while winning 62 games with the San Antonio Spurs in 1994-95, also coached the Knicks, the Pacers, the SuperSonics before joining the Apache this season in Japan’s basketball league, where teams often play three United States players at a time. He said Tyler was simply too young to jump from his junior year at San Diego High School to a different culture.

“How can you send an 18-year-old to Israel by himself?” Hill said. “First of all, the Israel league is good. There’s no way he was ready, especially if he didn’t have an American coach who could bring him along. I mean, they took him out of high school in his junior year. It was a disaster. He didn’t do well. He’s doing much better here than he did in Israel.”

Hill said he has tried to wean Tyler off a permissive American grass-roots basketball culture that, he said, is “at an all-time low” in terms of grooming prodigies for the adult rigors of basketball life.

“They too often kiss the butts of these young kids and tell them how great they are,” Hill said. “Young 17-, 18-year-olds believe it. Jeremy is a product of that to some degree. I’ve had to break him. I’ve had to get to a point where he says, ‘That was my fault,’ to take accountability for his actions. He’s finally there. It’s taken eight or nine months, and I’m proud of him. He’s going in the right direction.”

Though Tyler still has too many fouls and turnovers, Hill said he made significant progress over the final two months, and has always been a consistent rebounder. Tyler averaged 9.9 points and 6.1 rebounds a game this season coming off the bench.

Akita Coach Robert Pierce, an American who conducts news conferences in Japanese, said Tyler “couldn’t have a better guy to work with” than Hill.

“When Tyler stays within himself and stays focused, he’s good,” Pierce said. “He still travels a lot, and he has happy feet. But he’s got a lot of talent. He’s going to be good.”

Joe Bryant, a former Apache coach and former N.B.A. player, said Tyler “has a chance” to play in the N.B.A.  “He has a lot of potential and athleticism,” said Bryant, the father of the Los Angeles Lakers star Kobe Bryant. “It’s a matter of not trying to do too much, being mentally strong and having a work ethic, running the floor, rebounding, playing defense. You don’t have to score 20 points every night. Just work on one level of your game at a time.”

Jonathan Givony, the owner of DraftExpress.com, a basketball scouting service in the United States, said it was tough to assess Tyler’s stock in the draft because N.B.A. executives had not seen Tyler much over the last few years.

“They weren’t allowed to watch him in high school, he barely played last year in Israel and he was totally off the radar this season in Japan, playing in a league that gets very little respect internationally,” Givony said. “There just isn’t very much to go off right now.”

In the team’s Japanese group dynamics, Swift, who played under Hill in Seattle at age 19 after being picked 12th over all in the 2004 N.B.A. draft straight out of high school, has taken the role of senpai (senior) to the kohai (junior) Tyler.

“I’m just helping him every day with what I learned,” Swift said. “It’s the little footwork, the little details you’re not taught growing up but that make that much difference in the N.B.A. If you don’t know how to do it, you’re a step behind in the N.B.A.”

Referring to Swift, Tyler said: “He’s been big this season for me. In the heated moments, when my emotions are starting to get the best of me, I really appreciate it when they say ‘tone it down.’

“They’ve been in those situations, and they know how to deal with it. I’m on my own, my parents aren’t here. So I’m like a little brother to everybody. I have no choice but to listen.”