Milos Raonic has become the first Canadian to win on the tennis tour since 1995. Only 20 years old, Milos is surely not a flash in the pan. He has worked hard, and he seems eager to learn from his coaches and elders on the tour.

When I first talked to him after he tested Rafael Nadal in Tokyo in October, Milos surprised me with his composure and ability to see the bigger picture. Imagine a red-faced teenager with skinny legs in shorts on a cold night on his way to catch a bus, talking about how he wanted to be an ambassador for tennis, to inspire a generation of kids in a sport often overlooked in Canada, where hockey is religion.

Fast-forward to a few months later, and Milos is already en route to doing that. His rise is happening fast, almost too fast.  He is rocketing up the rankings, after beating Michael Llodra (ranked 22nd) and Mikhail Youzhny (10) in Australia, and Fernando Verdasco (9) to claim his first title in San Jose.

Everybody praises his serve and forehand, and they all forecast a great future for Milos and tennis in Canada. Nadal told me in Tokyo that Raonic’s talent is “unbelievable”, and a great thing for the development of tennis in Canada.  Llodra spoke in awe of Raonic’s second serve kicking high above his shoulders. After beating Milos in the round of 16 in Australia, 7th ranked David Ferrer, who took Milos under his wing in Spain, said Milos only needs “more experience.”

“He’s such a breath of fresh air. He has the game to be a top 20 players within 12 months, if he stays healthy,” former world number one Mats Wilander told me in a Melbourne cafeteria. “He will probably be the best player of all time from Canada. He has a good head on his shoulder. His serve is maybe the biggest of all. Nothing is holding him back.”

As Milos knows, the challenge now is to crack the top 50, and stay there. The mountain gets harder to climb the higher you go, and it’s easy to slip and plummet in the rankings, as the injured Juan Martin del Potro did after beating Federer to win the US Open.

It’s one thing for Milos to sneak up on Youzhny and ace him off an outside show-court n a scorching afternoon in Melbourne, or to beat Verdasco, who is recovering from an ankle injury. Milos also got lucky when Gael Monfils pulled out ahead of their semi-final in San Jose with a wrist injury. So far, fortune has been on his side, and Milos has worked hard to take advantage of his opportunities, at times showing the mental fortitude that separates the champions from others.

While people rave about his serve and forehand, Milos has also won long, tough rallies in clutch situations against baseliners such as Ferrer and Verdasco. Milos was down 6-2 in a tiebreaker against Verdasco, and stormed back to win the first set.  He won an epic 20-shot rally in the second set tiebreaker, and then hit a monster serve to win the match when Verdasco was clawing back. It’s not just losing and adversity that build character. These type of gutsy wins build character too.

Milos already has plenty of character to build upon. Everybody seems impressed with how he has outgrown his adolescent temper on court, thanks to his coaches and supportive friends and family. Off the court, at pressers and one-on-one interviews, Milos seems to get it. He answers questions with thoughtful honesty, and seems genuinely comfortable in a room with 50 people probing him under the spotlight. (Ferrer and Andy Murray, by contrast, don’t thrive in that environment, and Nadal, though loveable and earthy, often appears sleepy after his marathon matches) 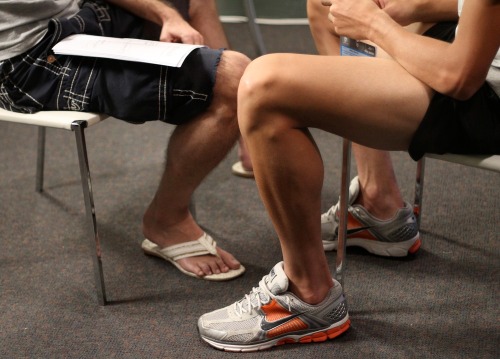 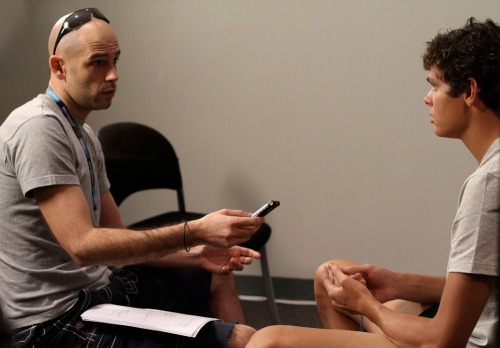 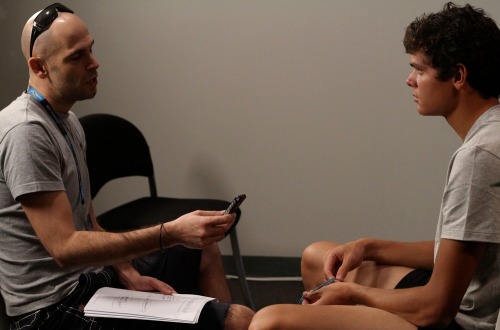 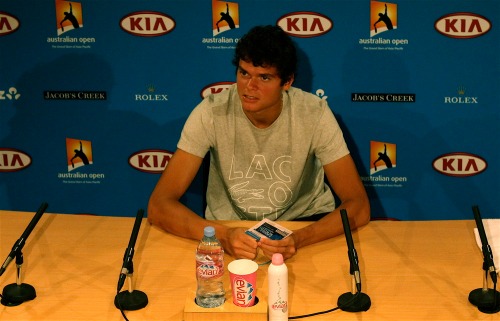 Writers for Sports Illustrated and others genuinely like Milos. Around the media, Milos is more like Federer; an articulate diplomat for tennis, Canada and his birthplace of Montenegro. Milos is fluent in English and Serbian, and he will probably get more confident in French and Spanish as he spends more time on tour. He believes that his upbringing in multi-cultural Canada has prepared him well for the world tour, where young players are not unlike nomadic backpackers hopping to a new country every week, checking in and out of hotels and trying to catch sleep on overnight flights.

It’s too early to say that Milos will one day become a cultural ambassador for UNICEF, with a foundation to help the poor in the Balkans and elsewhere. The big questions now are whether Milos can stay healthy and remain in the top 100, crack the top 20, and eventually become like his idol Pete Sampras, whose stardust seemed to rub off on Milos in San Jose last week. As Sampras told him, Milos has to work a lot on his footwork and return game. He’ll need to continue building up mental and emotional toughness, and physical stamina, which softened late as his legs grew weary in his loss to Ferrer. While the fast grass of Wimbledon will suit his aggressive style, Milos will have to train hard and expand his horizons to develop a solid ground game on clay, a slower surface which favors the fleet-footed grinders from Spain.

Most importantly, he will have to learn how to deal effectively with success, the disorientation of constant world travel, and the loss of privacy that comes with fame. Milos is already front-page news in Canada, though all he did was make the round of 16 in Melbourne, and win one of the smaller tour events early in the season. Players who offer advice and encouragement now might feel differently if they keep losing to him. Journalists and fans who welcome him now — as the loveable young underdog — can easily turn on him, as they did on Greg Rusedski, who spurned Canada in favor of the more developed tennis culture in the UK.

My sense is that Milos understands this, and has already mapped out who he is going to be, whether he succeeds in tennis or not. When I asked him during his coming out party in Melbourne if his life was changing fast in the span of a week, he said that even if his tennis life changes, his personal life will not. How many 20-year olds think like that? (I certainly didn’t.)

Like Sampras, Agassi, and Novak Djokovic, Milos has roots in the old world, where honour has meaning and family-based traditions run deep. His uncle was vice-president of Montenegro when it became independent from Serbia. His parents in Thornhill, Ontario are both engineers with post-graduate degrees who emigrated to Canada amid the Yugoslav war (which I covered in 1991 before my roommate was murdered in Vukovar). His siblings have returned to live in Montenegro, and Milos says he enjoys visiting there too, though he has made it very clear that he will always play for Canada.

His former and present coaches all speak positively about their star pupil.  From here, the rest is up to him. The ball really is in his court. At 6-5, with serves over 230 kph, Milos has the innate power to impose his game on opponents, and himself upon the tennis world. The game of tennis, and the media scene around it, is tailor-made for someone like him.

As Wilander says, players become champions when they believe there is no limitation to how successful they can be. Like many observers, I see no limits for Milos.