Loving the Machine, Japanese not worried about Orwellian privacy issues of face-recognition technology

TOKYO – Unbeknownst to many thirsty commuters, the Machine is studying their faces in detail, predicting what their favorite drink might be, based on their age and sex. Rolling its eyes and greeting humans with a smile, the Machine changes its face depending on the customer. It suggests four drinks out of 24 items on its touch-screen pad, and then says “Thank you” to some or “I love you” to others. In the event of an earthquake, it will even give out drinks for free.

In many countries, humans might not trust a Machine gathering information and flirting with them in public. But in tech-friendly Tokyo, people at Shinagawa station gather around this revolutionary vending machine to take pictures with it, or to test its intelligence. “It’s cool, and its fun to use,” says Franklin Singer, 12, who has come to meet the Machine along with his international school classmate Takumi Takamatsu. “This kind of stuff – facial recognition technology – is really expensive, but we like this in Japan. In five or six years, they’ll have new technology where they can hook up your brain and read your mind.”

Maybe not, but companies such as NEC, Panasonic and Samsung are reportedly developing similar face-recognition technology that could reshape the face of marketing, at least in the technological Galapagos of Japan if not overseas. NEC recently showed off its PanelDirector digital billboard technology to journalists at its headquarters, while NTT Communications briefly tested its own signage at a train station earlier this year. Using face-recognition technology developed by Japan’s Omron corporation over 15 years, East Japan Railways put two new “Dream Machines” in Shinagawa station on August 10, and sales of beverages have more than doubled, says Yoshikatsu Ito, a spokesman for the railway’s “water business” subsidiary. “People are finding the machine to be more fun than the older ones, so they are buying more,” he says. “It’s very futuristic. People want to see if it really works.”

The “Dream Machine” uses a tiny camera with a nin-sho (“human-feeling”) sensor to process tell-tale information such as wrinkles, skin texture, and facial structure. “When you look at a person, you are automatically trying to determine the gender and age of that person. The Machine is doing the same thing,” says Omron spokesperson Akiko Bamba in a Japanese interview. “Even if a woman changes her sex, or has cosmetic surgery, if people think she’s a woman, the machine will also think she’s a woman.” Bamba says the Machine is correct 75 percent of the time. In a two-hour period on Monday night, young women do follow the Machine’s advice and buy apple tea, while exhausted salarymen on their way home opt for hot coffee, and younger males go for sporty energy drinks such as Red Bull. Though an elderly man spends 10 minutes figuring out how the machine works, most of the tech-savvy younger consumers enjoy interacting with such an astute non-life form.

“Generally, Japanese have a favorable acceptance of automation in all aspects of society from industrial production to using the toilet, and automation has been a great boon to economic growth over the past 60 years,” says Tim Hornyak, a Canadian expatriate in Tokyo whose book Loving the Machine delves into Japanese attitudes toward robots and cutting-edge technology. “If this vending machine is going to do a better job than a human, they are more comfortable with it.” Hornyak says many Japanese find it less stressful to deal with a machine than with humans in Japan, where rigid codes of behavior and a complex language can complicate even basic social interactions. While many Japanese have become concerned about privacy issues after scandals over companies and state agencies leaking personal information, Hornyak says most Japanese are still very comfortable giving out personal details such as their age, birthplace and blood type, if it improves the level of service. “The efficiency of automation would trump their concerns about privacy,” he says.

Ito says that since the information is not stored, the Dream Machine is less invasive than security cameras at convenience stores which also sell beverages. The company’s plans to install about 500 machines around Tokyo over two years will also create jobs for humans, who program the machines with data such as weather forecasts to help it decide whether you want cold drinks on a hot summer morning or hot tea on a cold winter night. Both JR East and Omron say they have no immediate plans to export the technology overseas, and Hornyak also points out that the Machine would have a harder time reading faces in Canada’s multiethnic society than it does in homogenous Japan. While the Machine is only programmed to read Asian faces, not those of foreigners, it did somehow read the mind of this correspondent, recommending a bottle of orange juice on a hot humid night. SIDEBAR
Other Weird Vending Machines in Tokyo –beer and cigarette vending machines that require ID to prove the buyer’s age
–one doling out Dole bananas at Shibuya station
–another by hairdresser Toni & Guy offering hair-care products
outside their store in Harajuku
–another by Tateishi Burger offering hamburgers cooked fresh by a
chef manually operating the machine with a piece of string 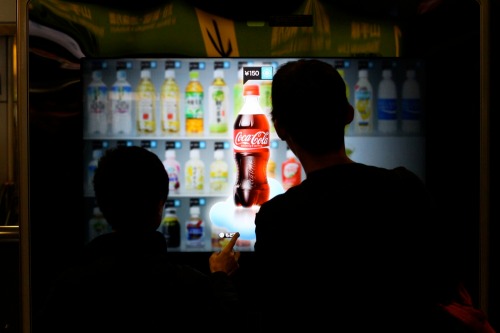 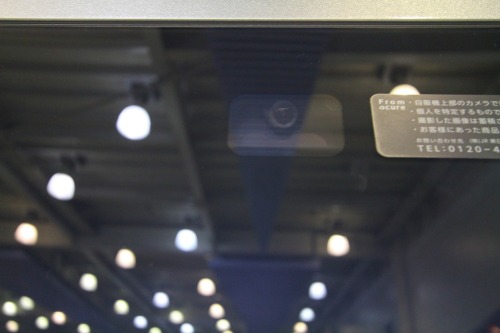