IZMIR, TURKEY — The second most popular game in the world, basketball has become much bigger in Europe than many realize in North America, where the world basketball championship is often overlooked.

Even though Canadian James Naismith invented the game, Canadians can’t help but feel like outsiders in a passionate European basketball culture that has become second only to soccer in this part of the world. While Canada’s team at the worlds only seems to have a few dozen supporters on hand in Izmir, opponents from Lebanon, Lithuania, France, New Zealand and Spain have travelling hoards of raucous fans with massive flags, deafening drums and anthems for local heroes who are unsung in NBA circles.

Ask Lithuanians if they like basketball, and they almost get offended. Naismith, they point out, was a Lithuanian-Canadian. “Basketball for us is religion No. 2,” says Lithuanian photographer Robertas Dackus, wearing his team’s green uniform. “We are Catholics first and basketball fanatics second. My job is to cover sports, and basketball is our only sport.” After games, people across Lithuania will come onto their balconies to sing Marijonas Mikutavicius’s sports anthem, Trys Milijonai (Three Million), whose lyrics roughly translate as, “Even if we lose nine times, we must not lose hope, because we will win the 10th time,” he says.

Robertas Narmontas, a video maker from the capital Vilnus, says Lithuanians can’t even imagine a summer without a major basketball tournament, such as the International Basketball Federation (FIBA) world championship, or last year’s EuroBasket played in new 10,000-seat arenas in Poland that are packed even for league games. “For us, FIBA 2010 is like the World Cup of football. The whole nation is coming together for these games,” he says.

Across host-nation Turkey, Muslims and Christians of both genders are packing restaurants and tea shops to watch games on TV, or at the packed arena in Ankara. Victorious fans drive around honking horns, or sit on top of public buses waving flags and serenading their favourite players, who grace posters everywhere from Kayseri’s ancient fortress to the square across from the Blue Mosque in Istanbul.

The French fans, who bring a love of the game and a hatred for traditional rivals, whistled and jeered at Spanish kid wizard Ricky Rubio throughout France’s upset of the defending world champions on Saturday. The Spaniards, meanwhile, take their festive Conquistador spirit with them to Tokyo, Beijing or wherever their team is playing, dawning exuberant hats and taking over hotels and bars on Izmir’s elegant sea-side promenade.

Even the South Pacific island nation of New Zealand, supported by world travellers including a group who drove a van from London, is bringing its unique culture to the games. Known as the Tall Blacks, New Zealand’s basketball players are stunning fans and opponents alike by preparing for games with the Maori Haka war dance popularized by their All Blacks rugby teams.

Last Saturday, fans from Lebanon, draped in their Cedar Tree flag, seemed to outnumber the Canadian fans by 100 to 1, as they called out the nickname of national hero Fadi El Khatib, The Tiger, who led the country’s come-from-behind victory over Canada. “It seems like everybody here is against us all the time,” says Andy Rautins, a young Canadian shooting guard who says he speaks some Lithuanian. “But I’m glad to see the Lithuanian fans get into it. It’s part of my culture as well.”

His father and coach, Leo Rautins, a Lithuanian-Canadian who was cheered by Lithuanian journalists at a press conference after Canada lost to Lithuania on Sunday, says Canadian basketball culture can build upon the country’s multicultural society, where many new immigrants are coming from basketball-crazed countries. “Basketball is the fastest growing sport in Canada,” he says. “It’s the second most popular in terms of participation. What’s happening in Canada now has been happening before in the rest of the world.” He says the game would grow even bigger if Canada’s national team could play more games across the country, and if Vancouver, Toronto or other cities could get funding to hold a future world championship, after Toronto’s successful staging of the 1994 event.

But for now, fans such as Graeme Ryder and Adam Jones, college buddies in Grande Prairie, Alta., who have travelled to Turkey to get cheap €20 ($26.85) tickets for the games, can only look up with awe at the antics of European fans. “It’s awesome. The fans are what makes the atmosphere,” says Ryder, while sightseeing at Izmir’s Clock Tower. “It’s something you wouldn’t see in North America for any event, maybe other than college basketball or football. The fans from Lebanon and France, for example, are insane.”

“For some reason, this event doesn’t mean as much to some people in North America as the Olympics,” Jones adds. “That’s too bad, because it’s an amazing tournament.” 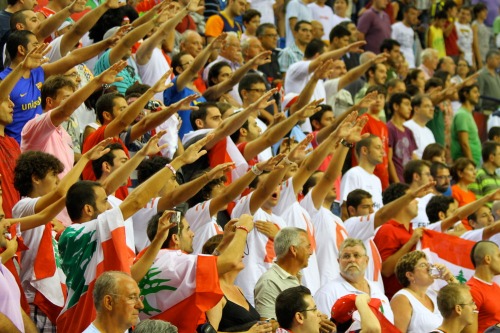